The official event marked the beginning of a new relationship between the Qatar Airways group and Gulfstream, as Qatar Executive received the first of its order for up to 30 new market-leading business jets, including Gulfstream’s all-new G500 and G600, for which Qatar Executive is the global launch customer.

The initial Qatar Executive order was for 20 Gulfstream aircraft, which was increased by another 10 aircraft at the last EBACE exhibition in Geneva in May 2015.

As the world’s largest and fastest civilian aircraft, the Gulfstream G650ER is one of the most sought-after business jets thanks to its phenomenal range, industry-leading cabin technology and unparalleled cabin comfort.

“Qatar Executive demands nothing less than the best for its discerning passengers and the G650ER, as the technologically most advanced business jet available in the market, enables us to offer a superior product to our valued customers.”

“We are honoured to welcome Qatar Executive back to Savannah and deliver their first Gulfstream aircraft,” said Gulfstream President Mr. Mark Burns. “This delivery is the next step in our partnership with Qatar Executive as they bring the tremendous capabilities of the G650ER to their customers in the Middle East, and we look forward to the continued relationship as their Gulfstream fleet grows.”

The Qatar Executive G650ER aircraft can fly non-stop from the Middle East to North America or from destinations in Asia to Africa – farther, faster than any other jet of its kind – and is perfectly suited for those whose travel needs include flying halfway around the globe.

With the largest panoramic windows of any aircraft in the world of business aviation, the industry’s lowest cabin noise levels and excellent payload-carrying capability, customers will receive a premium charter experience, while they immerse themselves in the understated luxury and timeless elegance of the aircraft’s cabin interior.

The G650ER’s cabin is not only comfortable but also contains the most advanced technology. Productivity features include satellite communications, high-speed internet and wireless local area network, which allows guests to use the jet as an “office in the sky”.

The Gulfstream’s Cabin Management System further enables passengers to control a wide range of cabin features such as the window shades, lighting, cooling and the vast entertainment options.

Qatar Executive’s ultra-long range G650ER has a two cabin configuration and a capacity for up to 13 passengers. Seats convert into fully-flat beds so that seven guests can easily sleep on board. The aft cabin features a comfortable three-seat divan made of the finest woollen fabrics by the exquisite luxury label Loro Piana.

Further stand out features of the Gulfstream G650 are the fact it has the lowest equivalent cabin altitude of any business jet and the cabin air is replenished 100 per cent every two minutes.

The latest delivery follows Qatar Executive’s announcement in May 2015, to purchase up to 30 aircraft from Gulfstream Aerospace Corp, including firm orders and options that are a combination of both of Gulfstream’s new wide-cabin aircraft, the G500 and G600, and the flagship G650ER. Qatar Executive’s service portfolio includes aircraft management, airliner charter, maintenance and FBO services.

Qatar Airways is a member of the oneworld global alliance. The award-winning alliance was named the World’s Best Airline Alliance 2015 by Skytrax for the third year running. Qatar Airways was the first Gulf carrier to join global airline alliance,oneworld, enabling its passengers to benefit from more than 1,000 airports in more than 150 countries, with 14,250 daily departures.

This year, Qatar Airways launched Oryx One, an enhanced interface for its inflight entertainment system, increasing the number of movies and TV shows on board from 950 to up to 2,000. Passengers flying on Qatar Airways flights served by its B787, A350, A380, A319 and as well as select A320 and A330 aircraft can also stay in touch with their friends and family around the world by using the five-star airline’s on-board Wifi and GSM service. 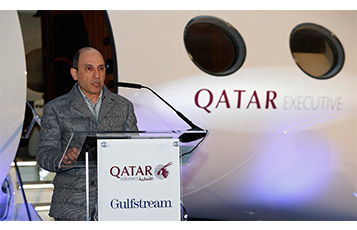