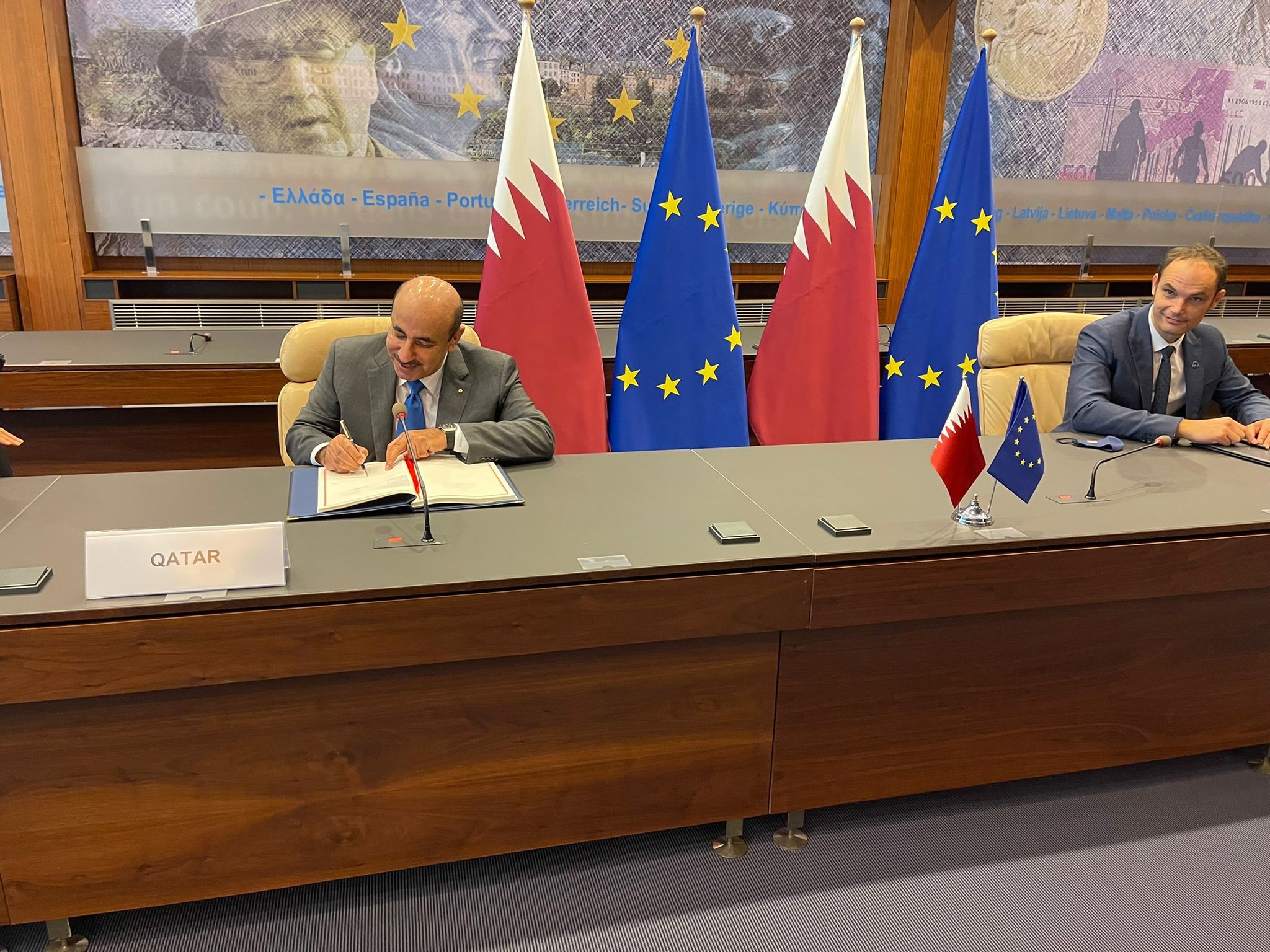 DOHA, Qatar, 2021-Oct-26 — /Travel PR News/ — The State of Qatar and the European Union signed a landmark Comprehensive Air Transport Agreement in Luxembourg on 18 October 2021, an Aviation Agreement that will ensure the highest level of safety and security, while enhancing connectivity and freedom of movement for travellers.

The Aviation Agreement was signed by the Minister of Transport of the State of Qatar, H.E. Jassim Saif Ahmed Al-Sulaiti, the Minister of Foreign Affairs of the Republic of Slovenia H.E. Anže Logar, whose country is currently holding the Presidency of the Council of the European Union, and the High Representative of the EU for Foreign Affairs and Security Policy, and Vice-President of the European Commission, H.E. Josep Borrell.

The State of Qatar and the EU Member States are strategic partners, and the relationship between both parties has been much closer since June 2016, after the European Commission obtained authorisation from the EU Council to negotiate this Aviation Agreement. Delegates from Qatar and the European Commission started negotiations in September 2016 and met for five formal rounds of negotiations, with the conclusion of such negotiations announced during the CAPA Qatar Aviation Aeropolitical and Regulatory Summit held in Doha on 5-6 February 2019. Subsequently, the Aviation Agreement was initialed by both parties in Brussels on 04 March 2019 in a ceremony attended by senior officials of the European Commission, EU Member States, major European airlines, and key aviation industry associations and specialised agencies.

Qatar Airways welcomes an Aviation Agreement with our European partners, which is far more relevant and modern than any other related to air transport.

This Aviation Agreement represents the new global benchmark for aviation agreements, providing a single set of rules, high standards and a platform for future cooperation on a wide range of aviation issues, such as safety, security, environment, competition, consumer protection, social matters, and air traffic management.

Environment is noted as a key highlight of the Agreement, recognising the importance of working together, to consider and minimise the effects of aviation on the environment.

Qatar Airways, as one of the primary customers of this Aviation Agreement, has already taken bold steps to move forward with several initiatives to address climate change – one of the most pressing topics within the European Union. Qatar Airways, in addition to embracing the International Civil Aviation Organization (ICAO) commitments to carbon-neutral growth beginning in 2020 with further annual emissions reduction targets, is committed to achieving net zero carbon emissions by 2050, aligning with the European Green Deal.

As World’s Best Airline, Qatar Airways has a strong commitment to excellence in all its business operations. Qatar Airways is the first airline in the Middle East to achieve the highest level of IATA Environmental Assessment (IEnvA) certification. It became the first carrier in Middle East to join the ICAO Global Coalition for Sustainable Aviation, reaffirming its commitment to work together with the relevant industry stakeholders, and the IATA Turbulence Aware data exchange platform, ensuring a smoother journey in the air with a lower fuel burn. Both Qatar Airways and Qatar Executive are not only compliant with ICAO’s Carbon Offsetting and Reduction Scheme for International Aviation (CORSIA), but they are also compliant with the EU Emissions Trading System (EU ETS).  Currently, Qatar Airways is working closely with Germany and France environmental agencies that are responsible for its region.

Qatar’s Minister of Transport, H.E. Mr. Jassim Saif Ahmed Al Sulaiti, said: “the Agreement is a testimony to Qatar’s notable profile in air transportation and that the national carrier has such an active role around the world.”

Qatar Airways Group Chief Executive, H.E. Mr. Akbar Al Baker, said: “We are very glad that the European Union and its Member States have continued to recognise and understand the value our Aviation Agreement brings to their economies.

The signature of this historic Aviation Agreement will bring together industry stakeholders, creating new opportunities for synergies to develop the aviation sector. Based on what we have achieved in the past, I am convinced that Qatar Airways will continue to play an ever-increasing role in the further development of the European air transport industry.

As a leading airline, we understand the importance of meeting the targets as set in the European Green Deal and we will continually work together to achieve the climate neutrality goals.”

Minister of Foreign Affairs of the Republic of Slovenia H.E. Anže Logar, said: “The agreement is a crowning achievement of years and years of negotiations. Qatar is an important partner of the EU and this agreement represents the continuation of our close cooperation”

Commissioner for Mobility and Transport, Adina Vălean said: “This agreement, the first one between the EU and the Gulf region, is a global benchmark for forward-looking aviation agreements. It is testimony to our shared commitment to economically, socially and environmentally sustainable aviation, based on a modern framework covering fair competition and closer cooperation on social and environmental matters. This agreement will bring new opportunities, more choice and higher standards for passengers, industry and aviation workers.”