The state-of-the-art stand witnessed an overwhelming welcome from ATM’s visitors, where it included a display of the new luxury First Class seats that will form part of the A380-800 aircraft’s tri-class configuration.

The participation started with a packed press conference hosted by Qatar Airways Chief Executive Officer His Excellency Mr. Akbar Al Baker at the Dubai International Convention & Exhibition Centre. Mr. Al Baker provided the regional and international media with an update on the newly opened Hamad International Airport and the airline’s highly anticipated arrival of its first Airbus A380-800 in early June, the first of 13 such aircraft on order.

Qatar Airways’ stand also welcomed during the exhibition’s first day His Highness Sheikh Mohammad Bin Rashid Al Maktoum, Vice-President and Prime Minister of the UAE and Ruler of Dubai, in addition to a large number of international and regional industry leaders from the travel and hospitality sectors.

Qatar Airways’ participation at Arabian Travel Market yet again proved a show-stopper with the airline celebrating its imminent launch of flights to its sixth and seventh destinations in the US – new routes to Miami from 10 June and Dallas/Fort Worth from 1 July 2014 – with Miami-styled Salsa entertainment and rope tricks courtesy of a local cowboy from Dallas.

You may also be interested in:  Qatar Airways Privilege Club members can now travel with less Qmiles and no booking fees for award flights

The stand also received some character mascots from KidZania, the award-winning children’s city concept with which Qatar Airways has partnered in Kuwait.

Concluding the successful participation, Mr. Al Baker said: “We are delighted with the outcome of our participation at the Arabian Travel Market, where we updated the global travel, tourism and hospitality industries about our major current achievements and reinforced the airline’s leading global position.”
For images: https://www.flickr.com/photos/qatarairways/sets/72157644146676209/

Qatar Airways is the national carrier of the State of Qatar. Currently undergoing rapid expansion, Qatar Airways is one of the fastest growing airlines operating one of the youngest fleets in the world. Now in its 17th year of operations, Qatar Airways has a modern fleet of 134 aircraft flying to 138 key business and leisure destinations across six continents.

During the 2013 Dubai Air Show the airline placed orders for more than 60 new aircraft – a mixture of Boeing 777X and Airbus A330 Freighters. In total the airline has 300 aircraft on order worth more than US $50 billion. The airline will move into its new hub and home, Hamad International Airport, in 2014. For more information, visit our homepage www.qatarairways.com or our sites on Facebook, Twitter, Google+, Instagram, and YouTube.

You may also be interested in:  Qatar Airways inaugurates non-stop flight from Doha to Sohar; its third destination in the Sultanate of Oman 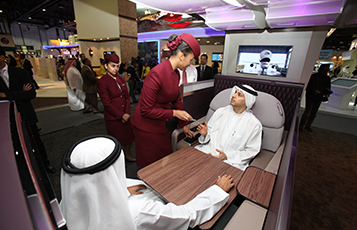