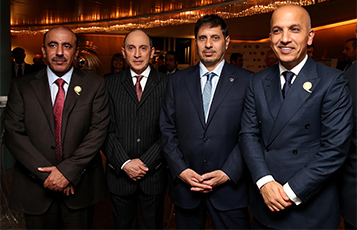 DOHA, Qatar, 2017-Mar-29 — /Travel PR News/ — Qatar Airways’ participated in the Qatar-UK Business and Investment Forum taking place in both London and Birmingham this week under the patronage of Qatar’s Prime Minister and Minister of Interior, His Excellency Sheikh Abdullah Bin Nasser Bin Khalifa Al Thani. This significant event included a roundtable meeting with UK Prime Minister Ms. Theresa May and was attended by senior Qatar and UK political representatives such as the UK’s Secretary of State for International Trade, Dr. Liam Fox and Qatar’s Minister of Transport and Communication, His Excellency Mr. Jassim Saif Ahmed Al Sulaiti and Minister of Finance, His Excellency Mr. Ali Shareef Al Emadi. The forum also featured an impressive gala dinner attended by His Royal Highness Prince Edward, the Earl of Wessex and his wife, Her Royal Highness the Countess of Wessex.

H.E. Mr. Al Baker spoke at a panel discussion on the first day of the forum, commenting on the leading role that aviation plays in the expanding business landscape relationship between the two countries. H.E Mr. Al Baker spoke alongside other leading speakers such as H.E. Dr. Hanan Al Kuwari, Minister of Public Health and H.E. Dr. Hassan Al Darhem, President, Qatar University. Qatar Airways works with many British companies such as Rolls Royce contributing to both investment and employment opportunities. During this high profile appearance to the delegation, H.E. Mr. Al Baker hinted towards a further commitment to the UK economy with a potential expansion to two new UK destinations.

Qatar Airways’ Group Chief Executive Officer, H.E. Mr Akbar Al Baker, said: “I’m honoured that Qatar Airways has been able to participate at this important event under the guidance of our Prime Minister and Minister of Interior, His Excellency Sheikh Abdullah Bin Nasser Bin Khalifa Al Thani. We are proud of the part we play in encouraging trade between the UK and Qatar with more than 70 flights each week between the State of Qatar and destinations in the UK such as London Heathrow, Birmingham, Edinburgh and Manchester. In addition, London is home to the headquarters of International Airlines Group (IAG), of which we are a proud shareholder and the UK will also be the very first market to which we will fly our recently launched Qsuite this summer, bringing First to Business Class, a direct reflection of the importance we place upon the Qatar – UK relationship.”

The two day Forum, which took place 27 to 28 March across both London and Birmingham, provided a significant platform to develop the trade and investment relationships between Qatar and the UK, while raising the profile of the strong relationships that exist between the two countries. The event showcases the best of UK industry in key sectors of mutual interest, such as healthcare, cyber security, education, finance and global sports – all areas of UK expertise that support the Qatari 2030 National Vision. There are twenty thousand UK citizens who live in the State of Qatar and forty thousand who visit the country annually from the UK, and Qatar Airways is proud to provide a modern and efficient transport infrastructure, with a fleet of the world’s latest generation aircraft and one of the most modern airports in the world, Hamad International Airport.

The forum included an invitation for H.E. Mr. Al Baker to attend a VIP round table discussion with UK Prime Minister Ms. Theresa May on the importance of the UK-Qatar relationship, alongside key representatives from Qatar itself including H.E Sheikh Abdullah Bin Nasser Bin Khalifa Al-Thani, Prime Minister and Minister of Interior to the State of Qatar, while H.E. Mr. Al Baker also held a private meeting with Secretary of State for International Trade for the United Kingdom, Dr. Liam Fox.

That same evening, Qatar Airways hosted a gala dinner at London’s Dorchester Hotel for more than 450 VIP guests, including notable dignitaries such as H.E Sheikh Abdullah Bin Nasser Bin Khalifa Al-Thani, Prime Minister and Minister of Interior to the State of Qatar. At the dinner, held in celebration of Qatar Airways ties with the UK, to which it has this month proudly served London Heathrow for 20 years, H.E. Mr. Al Baker also had the opportunity to greet with Her Royal Highness the Countess of Wessex, who sharea mutual interest in the UK based Orbis Flying Eye Hospital, of which H.E. Mr. Al Baker was patron to a visit by the Orbis aircraft to Doha just last week.

Qatar Airways, the national carrier of the State of Qatar, this year celebrates 20 years of Going Places Together with travellers across its more than 150 business and leisure destinations. The world’s fast growing airline will continue to add a number of exciting new destinations to its growing network in 2017, including Chiang Mai, Dublin, Nice, Skopje and many more, flying passengers on board its modern fleet of 195 aircraft.

Qatar Airways proudly supports a range of exciting international and local initiatives dedicated to enriching the global community that it serves. Qatar Airways sponsors world-leading sports teams including FC Barcelona and Al-Ahli Saudi Arabia FC reflecting the values of sports as a means of bringing people together, something at the core of the airline’s own brand message – Going Places Together.