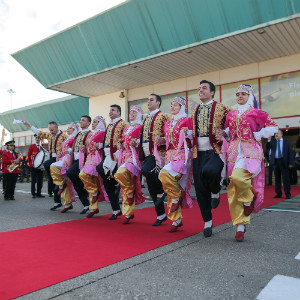 DOHA, Qatar, 2017-Nov-08 — /Travel PR News/ — Qatar Airways is celebrating the launch of scheduled services to Adana following the arrival of its inaugural flight from Doha to Turkey’s fifth-largest city.

Qatar Airways Group Chief Executive, His Excellency Mr. Akbar Al Baker, said: “We are delighted to launch our first direct service to Adana, a much-anticipated addition to our expanding global network. Turkey remains one of our key target areas for growth and we have identified Adana as an important Turkish destination to include in our expedited expansion plans.

Qatar Airways Chief Commercial Officer, Mr. Ehab Amin, said: “With the launch of this new service, we look forward to strengthening our ties with Turkey even further, and are delighted to be able to connect even more Turkish citizens to more than 150 global destinations via our five-star hub in Doha.”

Adana Airport Chief Manager, Mr. Ahmet Bülbül, said: “We are thrilled to welcome Qatar Airways flights to Adana, connecting passengers to destinations all over the world and enabling us to welcome the world to Adana. The State Airports Authority and Adana Airport Chief Management give Qatar Airways our full support and together we look forward to a successful future.”

Adana, located at the crossroads of Anatolia and the Middle East, is one of the most populous cities in Turkey. Passengers travelling to Adana can admire the magical sunsets over the Seyhan River, or taste the unique cuisine whilst enjoying a view of the river from one of the city’s dazzling rooftop restaurants. The sixteenth century Great Mosque (Ulu Cami), Clock Tower, the old bazaar and Adana Archeological Museum are among other top sights of Adana.

Qatar Airways has successfully operated service to Turkey for 13 years. The airline began services to Istanbul Ataturk International Airport in 2004, marking Qatar Airways’ first destination in Turkey. Since then, due to tremendous passenger demand, the airline has been steadily increasing its number of flights to the country.

The Doha-Adana route is operated by an Airbus A320, featuring 12 seats in Business Class and 132 seats in Economy Class.

The introduction of three weekly belly-hold flights to Adana will provide efficient connections for garment and textile businesses in the city to the Middle East, Asia and India via Qatar Airways Cargo’s state-of-the-art Doha hub. Qatar Airways Cargo currently offers twice weekly Airbus A330 freighters to Istanbul and 38 weekly belly-hold flights to the main airports in Istanbul and Ankara. With the new addition of Doha-Adana-Doha route, the cargo carrier aims to increase its market share in Turkey.

Named 2017 Airline of the Year, as awarded by Skytrax, Qatar Airways has a host of exciting new destinations planned for the remainder of this year and 2018, including Canberra, Australia; Chiang Mai, Thailand, St Petersburg, Russia; and Cardiff, U.K, to name just a few.