Doha, QATAR, 2013-12-05 — /travelprnews.com/ — Qatar Airways today announces it will be extending its footprint in the USA by announcing its seventh gateway to Dallas/Fort Worth (DFW). Service will commence on July 1, 2014.

The destination will become Qatar Airways’ second route in Texas; the airline currently operates to Houston non-stop daily from Doha.

A statement said that the airline’s latest announcement reinforces its commitment to the American market and the passengers that fly with Qatar Airways from the United States.

“We are pleased to continue enhancing our presence in the United States and are committed to providing passengers with an exceptional travel experience with Qatar Airways, as they travel on their long-haul and short-haul journeys.

“It is an exciting start to 2014 that we have announced three new American routes, and we look forward to welcoming our new and loyal passengers on board.

“We take this opportunity to thank the Dallas/Fort Worth International Airport for their support in enabling the commencement of Qatar Airways’ new services. DFW is the world’s fourth busiest airport, and we are pleased to begin operating services there.”

The Dallas/Fort Worth route will be operated with the airline’s flagship Boeing 777-200LR aircraft, which features a two-class design with 42 Business Class lie-flat seats in a 2-2-2 configuration.

Currently flying to four destinations in the United States – New York, Washington DC, Chicago, and Houston – the airline will nearly double its footprint in the country with the addition of three new routes in 2014: Philadelphia (2 April), Miami (10 June) and Dallas/Fort Worth (1 July).

Key destinations for passengers travelling from the United States across the airline’s hub in Doha include routes in India, Africa, the Middle East and Asia.

In line with Qatar Airways’ growth strategy, many routes are served with multiple frequencies, ensuring maximum connectivity and convenience by providing some of the shortest travel times in the industry.

atar Airways officially joined the oneworld alliance on 30 October of this year, which will provide passengers a seamless travel experience by having access to over 1000 cities which the alliance network covers.

Passengers travelling from nearby US cities to any of Qatar Airways’ gateways can travel on one of the oneworld alliance partners and enjoy seamless ticketing with baggage checked in all the way through to final destination.

On October 30, 2013, Qatar Airways joined the oneworld Alliance, becoming the only major Gulf carrier to join a global airline alliance, enabling its customers to benefit from almost a thousand airports in more than 150 countries, with 14,000 daily departures.

During the 2013 Dubai Air Show the airline placed orders for more than 60 new aircraft – a mixture of Boeing 777X and Airbus A330 Freighters. In total the airline has more than 280 aircraft on order worth more than US $50 billion. The airline will move into its new hub and home, Hamad International Airport from early 2014. 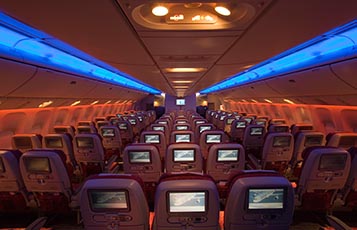