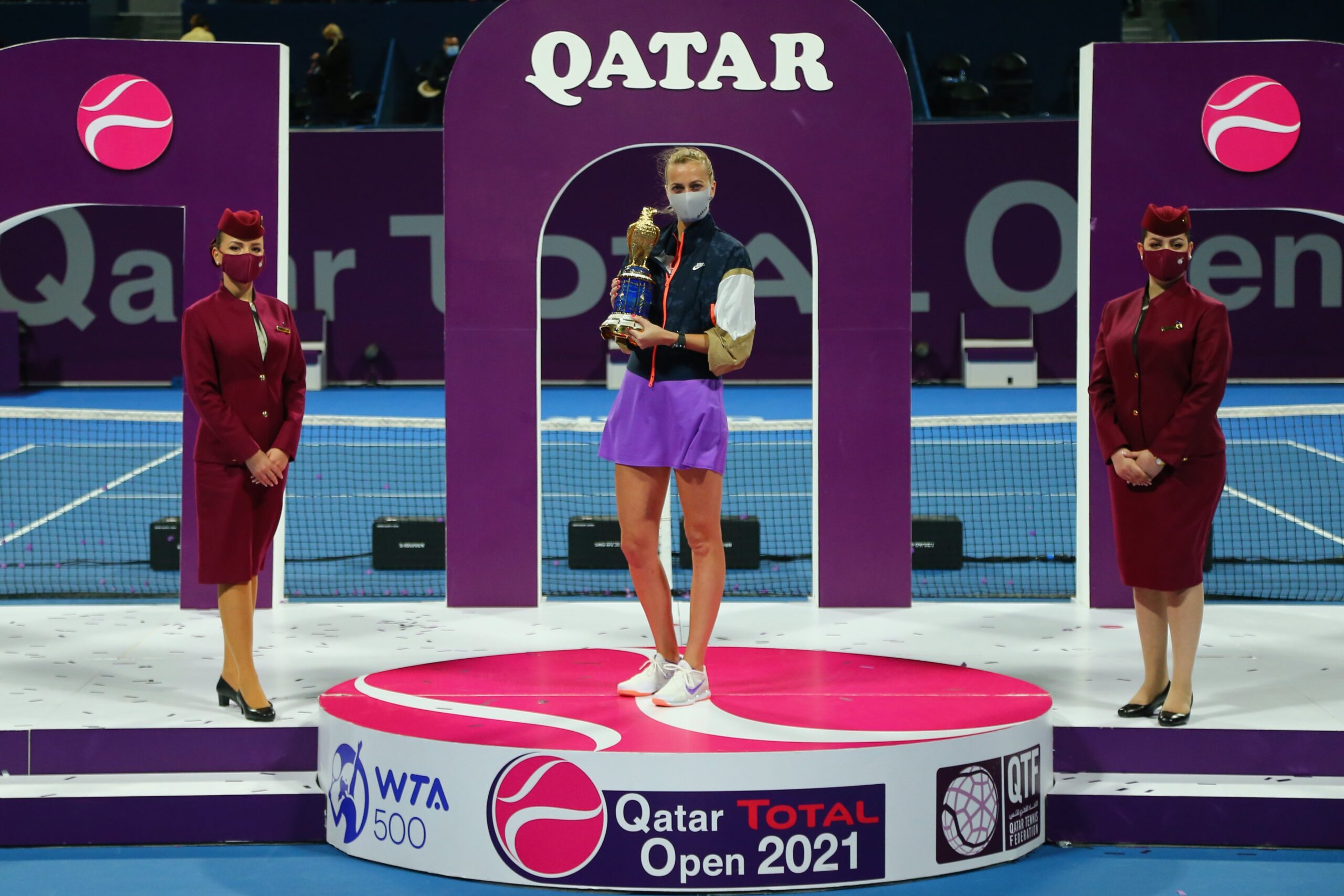 This is Petra Kvitova’s second win of the prestigious annual tournament which was held at the state-of-the-art Khalifa International Tennis and Squash Complex in Doha, from 1-6 March 2021, and featured the presence of renowned international female tennis players.

Qatar Airways Group Chief Executive, His Excellency Mr. Akbar Al Baker, said: I would like to extend my congratulations to Petra Kvitova in securing the this year’s Qatar Total Open 2021 title. Over the years, Qatar Airways has been a proud sponsor of this prestigious tournament, and once again the State of Qatar continues to demonstrate its dedication toward hosting world-class sporting events. We look forward to taking part in future tennis championships for years to come.”

Qatar Airways Senior Vice President Marketing and Corporate Communications, Ms. Salam Al Shawa, said: “Qatar Airways is delighted to congratulate Petra Kvitova after her victorious performance in this year’s annual Qatar Total Open. With every passing season, we are privileged to witness world-class athletes as they entertain us, and bring people of all ages and backgrounds together through sport.”

Qatar Duty Free Vice President Operations, Mr. Thabet Musleh, said: “Qatar Duty Free extends heartfelt congratulations to Petra Kvitova on her well-deserved win at the Qatar Total Open 2021.  We thank all the players for an exciting tournament. Thank you also to the WTA 500 and the Qatar Tennis Federation for bringing this global sporting event to Doha each year for spectators to enjoy both here in Qatar and across the world.”

With its recent announcement as the Official Airline for the UEFA EURO 2020™, Qatar Airways’ continues to strengthen its presence in the world of sport; with the likes of FIFA, CONMEBOL, Paris Saint-Germain, AS Roma, Boca Juniors, FC Bayern München, K.A.S. Eupen and Al Sadd SC in the carrier’s global football sponsorship portfolio, further representing its alignment with the national vision of Qatar.

Qatar Airways recently became the first global airline in the world to achieve the prestigious 5-Star COVID-19 Airline Safety Rating by international air transport rating organisation, Skytrax. This follows HIA’s recent success as the first airport in the Middle East and Asia to be awarded a Skytrax 5-Star COVID-19 Airport Safety Rating. These recognitions provides assurance to passengers across the world that airline health and safety standards are subject to the highest possible standards of professional, independent scrutiny and assessment. For full details of all the measures that have been implemented onboard and in HIA, please visit qatarairways.com/safety.

The national carrier of the State of Qatar continues to rebuild its network, which currently stands at over 130 destinations. With more frequencies being added to key hubs, Qatar Airways offers unrivalled connectivity to passengers, making it easy for them to change their travel dates or destination if they need to.

A multiple award-winning airline, Qatar Airways was named ‘World’s Best Airline’ by the 2019 World Airline Awards, managed by Skytrax. It was also named ‘Best Airline in the Middle East’, ‘World’s Best Business Class’, and ‘Best Business Class Seat’, in recognition of its ground-breaking Business Class experience, Qsuite. The Qsuite seat layout is a 1-2-1 configuration, providing passengers with the most spacious, fully private, comfortable and social distanced Business Class product in the sky. Qsuite is available on flights to more than 45 destinations including Johannesburg, Kuala Lumpur, London and Singapore. It is the only airline to have been awarded the coveted ‘Skytrax Airline of the Year’ title, which is recognised as the pinnacle of excellence in the airline industry, five times.