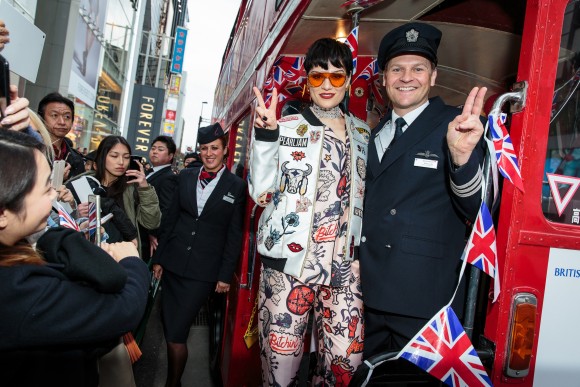 LONDON, 2016-Dec-02 — /Travel PR News/ — Pop star Jessie J brought a piece of London glamour to the streets of Tokyo as she boarded a red London bus in the heart of downtown Tokyo, to help British Airways bring a slice of  British culture to the Japanese capital.

During her visit, Jessie got involved in the latest craze ‘the mannequin challenge’ too..

The star, famous for songs including ‘Price Tag’, surprised locals by appearing as part of British Airways’ ‘London For Less’ campaign, highlighting the fantastic value foreign visitors can currently enjoy in England at the moment, with some of the city’s most famous attractions 45% cheaper than usual following the appreciation of the Yen..

Speaking after the event. Jessie said: “I grew up in London so I’m no stranger to riding double decker busses, but it has been a lot of fun to ride around on one in Tokyo and meet my fans here. London has always been an unbelievable city to visit – and right now it’s even better value than ever.”

As part of the event, members of the public were invited on board to meet Jessie J and take part in quizzes and karaoke contests to win prizes.

Jonty Brunner, British Airways’ regional commercial manager for Japan and Korea, said: “It’s not every day the people of Tokyo see a London bus coming around the corner – let alone get to ride one or meet a superstar like Jessie J on board!

“Everyone seems to have enjoyed the experience and we look forward to welcoming them on board a British Airways flight to visit London in the near future. The exchange rate of the Yen is now so strong against the Pound, that it’s the perfect time to fit in some Christmas shopping.”

Jessie gave her top tips for the festive season: “London in December has such a vibe. Whether you want to wander around the famous Harrods in Knightsbridge or bring out your inner child at Hamleys toy shop on Regent Street (I used to work there), visit Hyde Park and drink mulled wine at ‘Winter Wonderland’.

Taking a walk and discovering hidden gems to eat all over London. Go to pop up cinemas in Hackney, see the lights at Tower Bridge, or ice skate at the Natural History Museum – it’s beautiful! The biggest tip from me when in London is to look up – you discover beauty everywhere when you look up.”