Bangkok, Thailand, 2013-12-07 — /travelprnews.com/ — PATA has partnered with longstanding media partners TIME and CNN to drive donations to the Philippines via the PATA Foundation Disaster Relief Fund.

On newsstands from December 13, PATA has taken a full page advert in TIME to encourage people to donate their money to the Philippines and continue with business and leisure travel to the country. The advert, in TIME’S largest circulation print run of the year, the Person of the Year edition, shows PATA Foundation Chairman Mario Hardy representing the Association distributing supplies to villagers on Malaspacua on 17 November. The advert encourages readers to donate at www.PATAFoundation.org.

Airing from December 2, PATA has also taken a more than 13 minute advert on CNN Asia Pacific to rally donations for the Philippines via the Association’s semi-independent charity arm, the PATA Foundation.

All donations to the PATA Foundation until 25 December will be allocated to relief efforts in the Philippines.

Mr Hardy said: “PATA contributions are starting to help rebuild the lives and livelihoods of the people of the Philippines through a range of projects identified and implemented by those in the best position to help. In the months ahead, the Board of Trustees will update all donors with details about these projects. Donors can be assured that your donation is being well spent.”

To help the Philippines via the PATA Foundation click here. Further information:http://www.patafoundation.org/?p=907 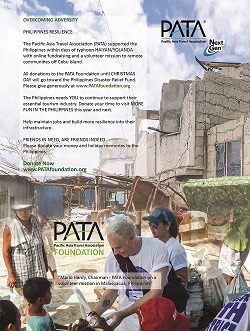