CHICAGO, 2014-7-16 — /Travel PR News/ — Today, a man who was resuscitated at a security checkpoint at O’Hare International Airport last summer finally met the group of people who helped save him.

While Wade Anderson and his wife, Dianne, were preparing to go through a Transportation Security Administration(TSA) checkpoint in Terminal 1 on July 9, 2013, he became faint and collapsed.

Raquel Prendkowski, a nurse from Mt. Sinai Hospital and Comer Children’s Hospital was headed for a vacation with her husband, Chicago Police Department (CPD) Officer Kevin Prendkowski. When she saw what was happening to Anderson, she stopped to offer assistance. Shortly thereafter, CPD Officer Pat McGrath relieved TSA Officer Neal in performing chest compressions until Chicago Fire Department Paramedics arrived on scene and took over the treatment.

Anderson was revived at the scene and taken to Resurrection Hospital.

The 71-year-old Chicago man and his wife returned to O’Hare today to meet the four people who helped save his life.

“I want to thank everybody” Anderson said. “It was like it happened to someone else. It was a miracle.”

He added that one of his doctors told him that the chances of his making it at O’Hare was one in a thousand – the chances of surviving his health scare outside of O’Hare – one in 10 thousand – thanks to the fast response of the people on scene and likely, the proximity of the AED.

You may also be interested in:  Shannon Airport: United Airlines re-introduced its seasonal nonstop service between Shannon and O’Hare International Airport

“On behalf of Mayor Rahm Emanuel, we are proud to commend our airport public safety partners and a medically-trained passenger for their life-saving actions given to Mr. Anderson,” saidRosemarie S. Andolino, Commissioner, Chicago Department of Aviation. “Their quick thinking and actions demonstrated how well-trained and dedicated they are to the safety and security of the traveling public.”

Dianne Anderson also expressed her gratitude to the first responders. “Don’t ever not help people,” she told them. 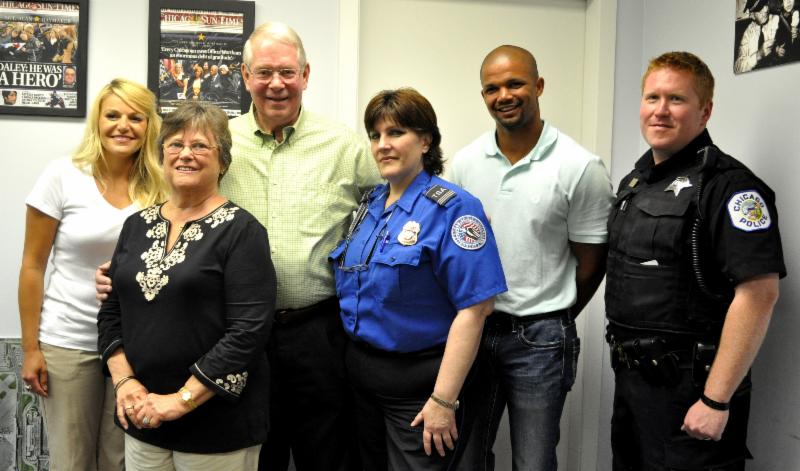