2012-12-17 — /travelprnews.com/ — Oslo Airport was named “Newsroom of the Year for public enterprises and organisations” by Mynewsdesk

For the third year in a row, Mynewsdesk announced the newsroom of the year in Norway. Oslo Airport was nominated in the public enterprises and organisations category, along with contenders such as the National Museum for Art, Architecture and Design, the Norwegian Society for Sea Rescue, Plan Norway and the United Nations Association of Norway.

Through this competition, Mynewsdesk wants to reward communicators, companies and organisations whose PR efforts through digital newsrooms really shine.

Success for Oslo Airport
Oslo Airport debuted its new digital newsroom in August, and the award has been met with considerable surprise and enthusiasm.

“A very nice recognition from the professionals in our field, and a signal that we are working proactively and in the right way to ensure good dealings with the media,” says Vegar Gystad, head of media relations for OSL.

The members of the jury include Magnus Eidem (Dagens næringsliv), Henny Wang (Mynewsdesk), Elise Frigstad (the Norwegian Communication Association), Terje Gulbrandsen (PR-operatørene) and Martin Hornburg (Mynewsdesk). The jury took a critical look at Oslo Airport’s newsroom in terms of both content and utilisation.

“It has been important to be critical of the news value of the published content, and how it is presented,” says Magnus Eidem, journalist in the newspaper Dagens Næringsliv and jury member.

He also believes that, in general, Norwegian companies and organisations are getting better at analysing what the media might find interesting.
This year, the jury has placed particular emphasis on the nominees’ ability to enrich their news with multimedia content such as high-definition photos and videos. A visit to the winners’ newsrooms will confirm that they all do a good job of this.

“We want to thank all the nominees for their efforts and the impressive commitment the companies and organisations have invested in their newsrooms. It is truly inspiring to see how they are able to create good news material,” concludes Henny Wang.” 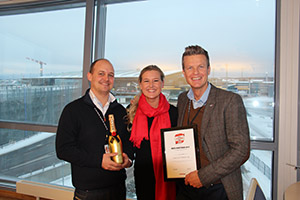