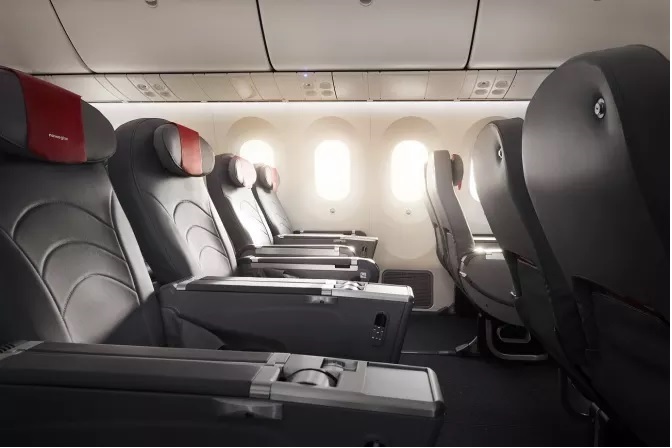 Voted Skytrax 2018 World’s Best Low-Cost Long-Haul Airline and Europe’s Best Low-Cost Airline, Norwegian offers a Premium experience unlike any other airline with unmatched fares to the USA as low as £760 return at www.norwegian.com/uk.

Norwegian’s Premium cabin offers an unrivalled transatlantic experience that includes lounge access at selected airports, fast track security and priority boarding before stepping onboard brand-new Boeing 787 Dreamliner aircraft. Premium offers spacious soft leather seats with a 9-10 inch recline, 11-inch inflight entertainment screens and more than a metre of legroom. Customers are greeted on board with welcome refreshments and receive a high-quality service with a three-course meal and personal onboard snack bar to take complimentary drink orders which are delivered to their seat.

From today, customers can view the lowest available Premium prices in the new Premium Fare Calendar. Customers already enjoy easy access to Norwegian’s Low Fare calendar which displays some of the lowest one-way nonstop transatlantic fares in the market.

The lowest Premium fares available from London Gatwick by route*:

Matthew Wood, SVP Commercial at Norwegian said: “We’re now making it easier for customers to take advantage of the lowest fares flying for the best value premium experience in the skies.

“Our new Premium Fare calendar demonstrates our continued commitment to improving the online customer experience which will enhance their travel by flying in Premium at the lowest available fares with Norwegian.”

Norwegian continued its UK growth with the launch of its newest long-haul route from London to Tampa on Wednesday 31 October with a twice-weekly service. The airline also commenced a third-daily New York JFK service on 28 October with a new mid-morning departure and resumed its seasonal service to Las Vegas on 29 October.

Norwegian is Europe’s third largest low-cost airline, carrying more than 33 million yearly passengers to around 150 global destinations. Norwegian has been named ‘World’s Best Low-Cost Long-Haul Airline’ for the fourth consecutive year and ‘Best Low-Cost Airline in Europe’ for the sixth year in a row at the renowned Skytrax World Airline Awards 2018.

*Based on lowest available one-way fare per person, incl. taxes and charges, subject to availability