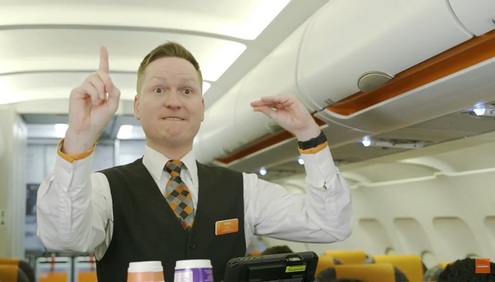 A secret airline cabin crew code used by easyJet staff has been revealed in a new instructional video that hit the internet today (11 MAY 2017).The low fare airline responded on social media to a passenger’s video recording of easyJet cabin crew conversing using bizarre hand signals, by releasing a never before seen video used for training new staff.

Jamie East tweeted: “.@easyJet excuse me but please explain what ON EARTH is going on here?!”

The footage left social media users mystified, with people taking to Twitter to share their guesses on what was going on. Sports presenter Gabby Logan commented “……the chicken in row 5 wants tea. Duh.” whilst one user tweeted “Got to be cabin crew playing charades right?!” and another guessed “It’s the birdie song!”

This led to easyJet later revealing on Twitter that the crew member was signalling to her colleague in the galley that a passenger had ordered a chicken baguette.

Due to the interest and excitement on social media the leading low fare airline has since released an instructional video used for internal training purposes, to teach new cabin crew the importance of the secret code. Hand motions explained in the training video include those for when passengers order from the food menu and for special situations including marriage proposals or stag parties.

Origin of the secret code remains unknown however, over the past 21 years easyJet crew members have meticulously honed the hand signals to establish their own ingenious sign language to communicate key messages to colleagues.

Tina Milton, Head of Cabin Services said, “With over 6 million passengers served each month, the ‘secret code’ has been invented to enable our cabin crew to deliver a speedy and efficient service, whilst keeping unnecessary crew noise to a minimum and provide passengers with a relaxing and enjoyable flight.

easyJet flight attendants are trained in all aspects of customer service and air safety, and the secret hand signals are an integral part of their inflight knowledge. We pride ourselves on providing an excellent inflight food service over the past 21 years, and our ‘secret code’ helps us to ensure customer satisfaction in a timely manner.

Next time you’re on-board an easyJet flight, have a look to see which hand signals from the code you can spot!”