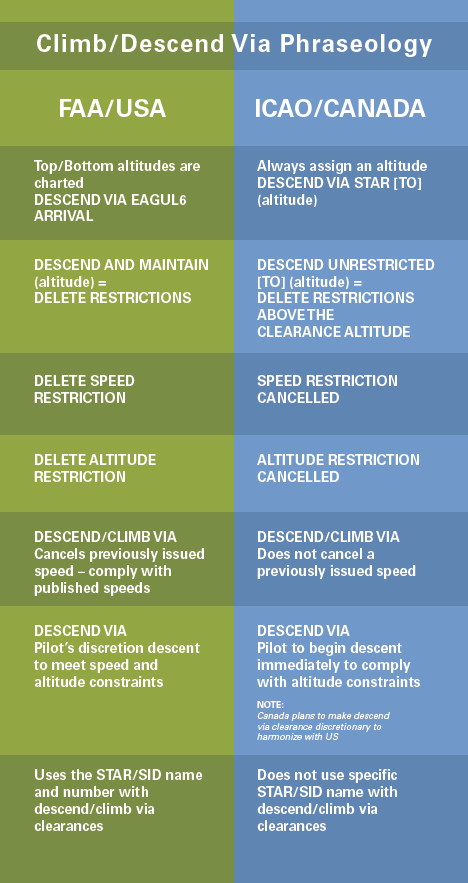 In November 2016, ICAO’s Procedures for Navigation Services – Air Traffic Management (PANS ATM) adopted the “Climb Via SID” and “Descend Via STAR” clearances. Prior to this change, ICAO Standards and Recommended Practices (SARP) held that SID and STAR clearances included both lateral path, as well as a clearance to comply with vertical constraints, which was contrary to FAA procedures.

With this change, the ICAO PANS ATM harmonizes climb via and descend via phraseology already in use, or pending, throughout the world. Nav Canada will adopt these new ICAO procedures on April 27.

“One potential ‘gotcha’ is that, as far as the FAA is concerned, a descend via clearance cancels any ATC-assigned speed restrictions,” Boll explained. “For ICAO and Canada, you must still comply with the speed assigned by ATC; that could catch U.S.-based pilots unaware when they’re flying internationally, and they slow down to meet the charted speed.

“Secondly, ICAO allows ATC to issue an ‘unrestricted’ climb or descend clearance, cancelling the charted speed and altitude limits,” continued Boll. “We don’t have similar clearances in the U.S; with an FAA ‘maintain’ climb/descent clearance, published restrictions apply unless specifically canceled by the controller.”

Despite these differences, Boll noted the greater significance of international acceptance of “via” clearances, which were first implemented by the FAA in 2014.

“The world is seeing the benefits of greater ATC discretion over vertical clearances when needed to allow for traffic separation,” he noted. “Harmonization is key, and I think we’re close enough to call that effort successful.”