LONDON, 2014-8-5 — /Travel PR News/ — easyJet, the UK and London Luton airport’s largest airline, invited Gavin Shuker, Member of Parliament for Luton South onboard today – 1 August 2014 to lend a helping hand with the airline’s Change for Good onboard collections which raise vital funds to support UNICEF in the global fight against Polio.

The MP joined Captain Lance Jordan and the cabin crew onboard flight EZY2031 for the short flight to Bordeaux on which he welcomed passengers and collected their donations of spare change and foreign holiday currency.

The Change for Good partnership between easyJet and UNICEF has raised a staggering £3,035,303 through passenger donations since it launched in July 2012. Almost £250,000 has been donated on easyJet’s flights in and out of London Luton airport alone.

The generosity from easyJet’s passengers on those flights in and out of Luton has raised enough money to provide vaccines for more than 925,000 children – the equivalent of Luton’s population almost four times over or Kenilworth Road – home of The Hatters filled to capacity an astounding 90 times.

“It was great to join easyJet crew and passengers to make a difference and help UNICEF’s work in saving childrens’ lives. It’s a great cause to support. Almost £250,000 has been donated by passengers in and out of London Luton Airport since the partnership began which is fantastic.”

You may also be interested in:  Sofia Airport and easyJet pleasantly surprised passengers with traditional Bulgarian symbol Martenitsi

Tina Milton, easyJet’s Head of Cabin Services and Captain Mark Wood – who are both based at the airline’s Head Office hangar 89 in Luton flew to Mauritania, North Western Africa to visit one of UNICEF’s  immunisation clinics which is supported by the Change for Good campaign earlier this year, to see the life-saving results of the onboard collections in action first-hand.

“We are delighted that Gavin was able to join our crew onboard today to help raise funds for this extremely worthy cause.

“On my visit to Mauritania it was wonderful to see how the money from customer donations from easyJet flights makes such a massive difference to these children and their families.

“We’re so proud of what we’ve achieved at easyJet through this partnership. We’ve been raising money for Change for Good since 2012 and in that time we’ve played a big part in helping the world’s leading organisation save millions of children’s lives.  A big thank you to our passengers from Luton who have given so generously.”

”The Mauritania field trip was tough and gruelling but highlighted exactly why the change for Good campaign and easyJet’s partnership with UNICEF is so important.

“I learned so much about the infectious disease of Polio, including how easy it is to prevent with a simple, inexpensive vaccine. The money we raise literally does save lives and we’re very grateful to all those who have donated so far.  Just 27p is enough to provide a lifetime of immunity* from Polio for one child.

You may also be interested in:  easyJet now the largest airline to and from Berlin

“We hope that their generosity continues throughout the Summer until our onboard collections end on 30 September.”

Over half a million passengers are expected to fly with easyJet over the summer period from Luton and the airline and UNICEF are urging them to donate as much as possible to help protect and save children’s lives from this crippling and potentially fatal, but preventable disease.

For more information please contact Dagmar Dua on dagmar.dua@easyJet.com or the easyJet Press Office on 01582 525252 or follow @easyJet_Press

About easyJet:
easyJet operates Europe’s No. 1 air transport network with a leading presence on Europe’s top 100 routes and at Europe’s 50 largest airports.

easyJet carries more than 60 million passenger annually of which 11 million are travelling on business.

easyJet flies over 200 aircraft on more than 600 routes between over 130 airports in 30 countries. More than 300 million Europeans live within one hour’s drive of an easyJet airport, more than any other airline.

About UNICEF
UNICEF promotes the rights and wellbeing of every child, in everything we do. Together with our partners, we work in 190 countries and territories to translate that commitment into practical action, focusing special effort on reaching the most vulnerable and excluded children, to the benefit of all children, everywhere. For more information, please visit www.unicef.org.

You may also be interested in:  Bristol Airport welcomes easyJet's expansion developments at its Bristol base

About UNICEF UK
UNICEF UK (the UK National Committee for UNICEF) raises funds for UNICEF’s emergency and development work and advocates for lasting change for children everywhere. We are a UK registered charity, supported entirely by voluntary donations. We do not receive any money from the UN. For more information, please visit unicef.org.uk

About Change for Good: Change for Good is UNICEF’s global initiative run in partnership with leading airlines all over the world. The airline partners include: American Airlines, Qantas and Cathay Pacific as well as easyJet in the UK. Change for Good globally has raised over £53 million for UNICEF’s work in support of children around the world. 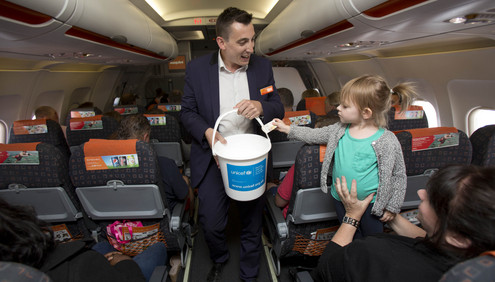