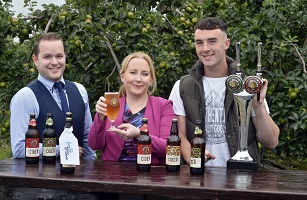 Long Meadow Cider’s contract with HMSHost International, the leading provider of food and beverage outlets in over 100 airports worldwide, was secured following the company’s Blossom Burst Cider beating over 70 local suppliers to be named Northern Ireland’s ‘Best’ local food and drink product in a competition launched by Belfast City Airport in partnership with Food NI earlier this year.

The Bushmills Bar and the recently rebranded St. George’s Market restaurant in the airport, both managed by HMSHost, will both stock the award-winning Blossom Burst flavour.

Peter McKeever, one of the Founders and Managing Directors at Long Meadow Cider, said:

“Having our Blossom Burst Cider named Northern Ireland’s ‘Best’ local food and drink product and receiving £30k of marketing support at Belfast City Airport has been a real turning point in our business, it has been the icing on the cake in what has been an incredible four years.

“As a small, family owned business, we never imagined getting to the finals, let alone winning! We are so grateful for the relationship we now have with the airport which has opened doors and has now led to our exclusive cider contract with HMSHost in Belfast.

“The first order was placed in mid-Summer with a second, larger, order placed the following week, and we believe this contract has the potential to be our biggest.

“Belfast City Airport welcomes approximately 2.7million passengers through its doors each year from domestic and international locations providing us with a considerable platform to showcase our product.

“Alongside the news that both Bushmills Bar and St. George’s Market will be stocking our cider, we launched our new Rhubarb and Honey flavour in July and it has surpassed all sales expectations.

“This new flavour is not only to celebrate our fourth year in business but also in response to demand for flavoured ciders.”

The company already exports to France, Mexico, Italy and the Republic of Ireland, and regularly receives international interest.

The McKeever family has been growing apples at Long Meadow Farm for three generations and all products are made from 100% natural Bramley apples, grown and harvested on the farm.

“Bottled cider is consistently one of the most popular selling bottled, alcoholic products in the Bushmills Bar and St. Georges Market at Belfast City Airport.

“Over the last number of years, we have focused on trying to create strong links with leading, local suppliers. Where we can work with local providers, we will.

“Long Meadow Cider has had a really successful few years and the feedback from our customers so far has been fantastic, so we’re delighted to work with Long Meadow as our exclusive craft cider partner in Belfast City Airport.”

“At Belfast City Airport, we are passionate about championing and supporting local brands.

“Last year we facilitated a relationship between World Duty Free and Shortcross Gin which has resulted in the product being stocked in a number of its outlets in airports across the UK, including Belfast City Airport.

“Our search for Northern Ireland’s ‘Best’ local food and drink product in partnership with Food NI earlier this year allowed us to provide the winner, Long Meadow Cider, with £30k of on-site advertising and marketing support to promote its brand to our 2.7million passengers each year.

“With passengers travelling from across the UK, or further afield through our summer Aer Lingus routes or KLM’s daily service to Amsterdam, it is vital that our retail and product offering is of a high standard. To be able to provide local produce to these customers is fantastic and we’re thrilled to introduce Long Meadow Cider to our customers in the Bushmills Bar and St. George’s Market.”

“The Belfast City Airport and Food NI competition was a fantastic platform for local food and drink producers from Northern Ireland, and the prize for Long Meadow Cider, which sees the brand promoted on a huge lightbox at the entrance to the airport, is a huge boost for the company.

“For this to have now extended to a contract with one of the leading providers of food and beverage outlets in airports worldwide is a real triumph, not only for Long Meadow Cider, but for innovation in local food and drink.

“I am over the moon to see companies such as Belfast City Airport and HMSHost working alongside suppliers and Food NI to ensure home-grown brands are championed and have a strong presence in front of local, domestic and international passengers.”