LONDON, 2014-5-13 — /Travel PR News/ — London Gatwick will tomorrow submit to the Airports Commission a 3,200 page, evidence-based report that shows clearly why expansion at Gatwick is the obvious solution to meeting the UK’s connectivity needs for the next generation.

A second runway at Gatwick will enable more people to fly to more destinations, earlier. It can be delivered more cost effectively, with a higher degree of certainty and much less planning, construction and financial risk.

Expansion at Gatwick will increase competition to destinations around the world from London’s airports which will deliver extra capacity at a lower cost and lower fares for all passengers. The economic benefit to the UK of this enhanced competition will be £40 billion more than Heathrow’s third runway. Furthermore, in contrast to the Heathrow case, this can be delivered at no additional cost or risk to the taxpayer.

Stewart Wingate, CEO of London Gatwick said: “As we reach this critical point in the aviation debate it is clear that the Airports Commission has a very real choice to make: expand Gatwick and create genuine competition in the market with lower fares for everyone, or move back to a London airport market dominated by a single player and saddle the next generation with higher air fares.

“Why would you choose to fly a quarter of a million more planes every year over one of the world’s most densely populated cities when instead you can fly them mostly over fields? Why tunnel part of the busiest motorway in Europe – the M25 – causing serious traffic disruption, when you can build on land already set aside for expansion? The choice is an obvious one. Expand the best and only deliverable option – Gatwick – and create a market that serves everyone.”

You may also be interested in:  Belfast City airport welcomes easyJet's new service to Glasgow

London Gatwick’s case for expansion builds on the strengths of the existing network of airports, which already serves London and the UK. It is the best solution on the grounds that:

Expanding Gatwick creates the market that works for all passengers

A two-runway Gatwick in competition with a two-runway Heathrow will encourage greater competition between airlines and airports, spur innovation, drive greater cost efficiencies and result in lower fares for passengers. Considering the effect of competition alone, we calculate that the UK economy would be better off by up to £30 billion over 60 years.

The alternative is returning to a market with one dominant player where passengers will end up paying more for less choice and less convenience.

Expansion at Gatwick will give the UK the greatest economic boost, more quickly, and more flights to more destinations from London.

It will deliver an overall economic benefit to the UK of around £40 billion more than expansion at Heathrow and at no additional cost or risk to the taxpayer.

Expansion at Gatwick would attract new businesses creating an additional 120,000 jobs across London and the South East.

Aviation is changing fast. It is important that any decision about where future runway capacity should go is one which best enables the UK aviation sector to adapt to market trends of the future rather than the patterns of the past.

The Gatwick proposal is best placed to align with key future trends – including continued market share gains by Low Cost Carriers, the spread of new technology hub-busting aircraft such as the Boeing 787 and Airbus A350, and the rapid rise of new hubs in the Middle East and Far East. It is most likely that such trends will continue to reduce the relative importance of traditional transfer traffic through London, and will confirm that seeking to install a single dominant hub is not the best solution for the UK’s future needs.

You may also be interested in:  London Gatwick Airport released Q1 2013 financial results

Only Gatwick can cater for all airline models – full service, low-cost and charter – with affordable charges and facilities that enable fast and efficient aircraft turnaround times. The best choice is to build at Gatwick and develop a future proof solution that can support growth of all airline models.

The alternative is to build at Heathrow which excludes the low-cost business model which has transformed the market over the past decade and continues to be the main driver of innovation.

Only Gatwick is the deliverable option

What the UK needs above all is certainty that additional runway capacity will at last be delivered. With Gatwick now firmly at the centre of this debate there is greater certainty that a new runway could be built.

Gatwick’s second runway is a straightforward construction project, building a new runway on land already set aside for runway expansion. Unlike Heathrow, it doesn’t involve putting the busiest stretch of the busiest motorway in Europe into a tunnel, which would cost the UK in excess of £1bn in disruption.

The lower construction risk means a second runway at Gatwick could be built for £7.8 billion – considerably less than the cost of a new runway at Heathrow. This would result in airport charges (£12-15 per passenger at today’s prices) that would be around a third of the price of Heathrow’s and an operational second runway by 2025.

Many fewer homes will be under the flight path than at Heathrow but to support those most affected, Gatwick has introduced Europe’s most progressive noise and insulation scheme. If a second runway is built, Gatwick will also compensate those most affected with an offer of £1,000 per annum towards their Council Tax.

The many planning, environmental, surface access and political difficulties associated with Heathrow means there is considerable doubt whether another runway would ever get built – giving the Gatwick option much greater certainty.

You may also be interested in:  Gatwick Airport launches its new Pier 1 facility housing an entirely new baggage system

For a summary of Gatwick’s case for a second runway please click here. 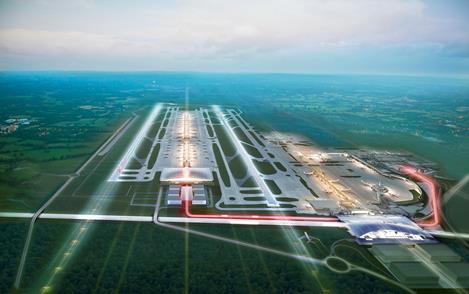