“I’m very pleased to have Joe leading the kitchen at BOURBON STEAK. We’ve been fortunate to have the highest calibere chefs from the day we opened in DC, and Joe is no exception. He’s worked with some of the best chefs in the industry, and his creativity and drive are second to none,” says Michael Mina. “BOURBON STEAK is at the top of its game right now, and I have no doubt it will continue to set the standard in dining excellence with Joe at the helm.”

Most recently, Palma was the executive chef at High Cotton in Charleston, South Carolina, a neighbourhood restaurant specializing in Low Country cuisine. His two-year tenure in Charleston was noted and appreciated by local food publications such as the Charleston City Paper and Charleston Magazine.

No stranger to Washington DC, Palma has spent the last decade working in some of the area’s most well-known and beloved restaurants. Prior to his move to Charleston, he was the chef de cuisine at Westend Bistro by Eric Ripert, located in the Ritz Carlton. There he became known for his polished dishes and creative plates boasting Southern flair. While at Westend Bistro, Palma introduced the popular summer BBQ stand where guests could enjoy a rotating selection of barbecue favourites weekly, such as pulled pork sandwiches, Texas-style brisket and North Carolina-pulled chicken. Palma also competed in and served as a judge for Cochon 555, a prestigious national culinary competition where chefs are judged on their dishes made using heritage pork breeds.

In addition to his red meat repertoire, Palma also came to be known for his mastery over seafood, which was no surprise given his two-year term as sous chef at Ripert’s Michelin-starred Le Bernandin in New York City, widely considered to be the top fine-dining seafood restaurant in the country.

Prior to working with Chef Ripert, Palma strengthened his French technique and fine-dining background with two notable DC chefs – Yannick Cam, under whom Palma served as sous chef at the elegant Le Paradou, and Michel Richard at the legendary chef’s fine-dining restaurant, Citronelle.

A graduate of the College of Charleston, South Carolina with Bachelor’s degrees in economics and philosophy, Palma is a self-taught chef with a penchant for harmoniously blending creativity with the culinary identity of a region. At BOURBON STEAK, Palma hopes to continue the tradition of consistency and excellence that is the hallmark of the restaurant, while offering new dishes that speak to his strengths – classic French cuisine and Mediterranean flavours. Palma looks forward to utilizing the tremendous bounty of the Chesapeake Bay watershed and local farms with whom he has worked in the past to accomplish his goals at BOURBON STEAK. 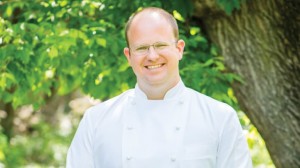