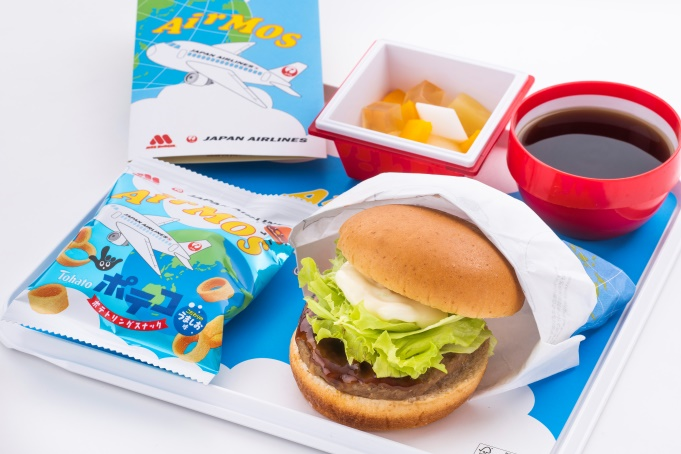 The AIR MOS series, a collaborated effort between JAL and MOS BURGER, launched in 2011 and has featured innovative menus such as the Teriyaki Burger, Yakiniku Rice Burger, and Cream Cheese Teriyaki Burger. The 9th collaboration, AIR MOS Teriyaki Burger, is a popular item at the fast-food restaurant featuring an original teriyaki sauce with crispy lettuce, adding texture to the meal.

JAL and MOS BURGER will continue to develop innovative and tasty meals for our valued customers.

Highlights of AIR MOS Teriyaki Burger
An original arrangement of MOS BURGER, the teriyaki burger is one of the most popular menus since its establishment in 1973, featuring a teriyaki sauce made from miso and soy sauce. The vegetables used at MOS BURGER are supplied domestically by affiliated farmers, who cultivate vegetables without agricultural chemicals or fertilizers to the greatest extent possible so one can fully enjoy the taste of fresh vegetables.

Tohato Poteko Snacks – JAL Limited Edition Package
‘Poteko’ (made by Tohato Inc.) will be served as a side menu, in place of French fries, in the image of a set menu served at MOS BURGER shops.

Design
The package, tray mat, leaflet and Poteko side menu, exclusively developed for AIR MOS Teriyaki Burger, are designed with a JAL aircraft illustration and the AIR MOS logo to enhance the visual appeal.