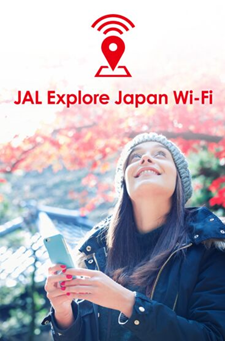 “JAL Explore Japan Wi-Fi” is an app for overseas visitors and available on supported Android/iOS devices. The app automatically connects the devices to over 200,000 Wi-Fi access spots throughout Japan operated by Wi2. The Android version was released on October 17, 2017, and the iOS version will be available on October 26, 2017.

The “JAL Explore Japan Wi-Fi” app is based on Wi2’s existing “TRAVEL JAPAN Wi-Fi”(*1) and offers improved convenience in the form of links to JAL’s overseas visitor information websites and services, such as “JAL Guide to Japan”(*2) and “JAL Japan Explorer Pass”(*3).

The “JAL Explore Japan Wi-Fi” app will be featured on JAL`s regional and overseas website to promote the product to all overseas visitors. In addition, JAL and Wi2 intend to expand the app’s functionality to improve convenience for visitors and strengthen the revenue channel for both companies.

*1     An app aimed at overseas visitors available on supported Android/iOS devices. It automatically connects the device to over 200,000 Wi-Fi access spots operated by Wi2. The access spots can be found all over Japan, but mainly at airports, large train stations, restaurants, tourist spots, etc.

*2     An information site for overseas visitors on JAL`s regional homepage.

*3     Japan domestic airline fare for overseas travelers with the aim of stimulating demand for travelling to and around Japan.

By downloading the app and agreeing to the terms of service, the user gains free and unlimited access to over 200,000 Wi-Fi access spots operated by Wi2 throughout Japan.

The “Tips” section provides easy-to-access links to service and information sites provided by JAL, such as “JAL Guide to Japan,” and “JAL Japan Explorer Pass.”

Delivers content from JAL, other companies and local governments etc. aimed at overseas visitors to users of the app both inside and outside the country.

About Japan Airlines:
Japan Airlines (JAL) was founded in 1951 and became the first international airline in Japan. A member of the oneworld® alliance, the airline now reaches more than 344 airports in 56 countries and regions together with its codeshare partners with a modern fleet of more than 227 aircraft. JAL Mileage Bank (JMB), the airline’s loyalty program, has reached over 31 million members worldwide. Awarded one of the most punctual major international airlines, JAL is committed to providing customers with the highest levels of flight safety and supreme quality in every aspect of its service, and aims to become the most preferred airline in the world.

About Wire and Wireless Co. Ltd.
Wire and Wireless Co. Ltd. (Wi2) is KDDI Group’s “Public Wi-Fi specialist carrier”. In addition to developing their own “Wi2 300” public Wi-Fi service, Wi2 is also a telecommunications carrier, which provides “au Wi-Fi.” Also, in addition to providing Wi-Fi services to many businesses and local authorities, Wi2 operates over 200,000 Wi-Fi access spots throughout Japan.

Recently, with the aim of improving connectivity for overseas visitors, they have launched an initiative to provide access to their Wi-Fi access spots at no cost through their “Travel Japan Wi-Fi” app, and have also engaged in other inbound business.

An app available on supported Android/iOS devices aimed at overseas visitors. It automatically connects the device to over 200,000 Wi-Fi access spots offered by Wi2. The access spots can be found all over Japan, but mainly at airports, large train stations, restaurants, tourist spots, etc.  Since release the app has attracted over 200,000* non-Japanese users and the number is increasing daily, especially with Asia-based users.  The app is also able to deliver information about products, services, stores and tourist information from over 100 Japanese companies and local authorities to overseas visitors. The amount of distributed content has grown in proportion with the surging inbound market, which has now reached 100 million in scope, and can be used to connect overseas visitors with domestic inbound business.

*Based on app download figures – Additionally, as it is possible to perform behavior analysis based on app users’ location data, it can be useful for designing inbound policies based on the facts in those reports.