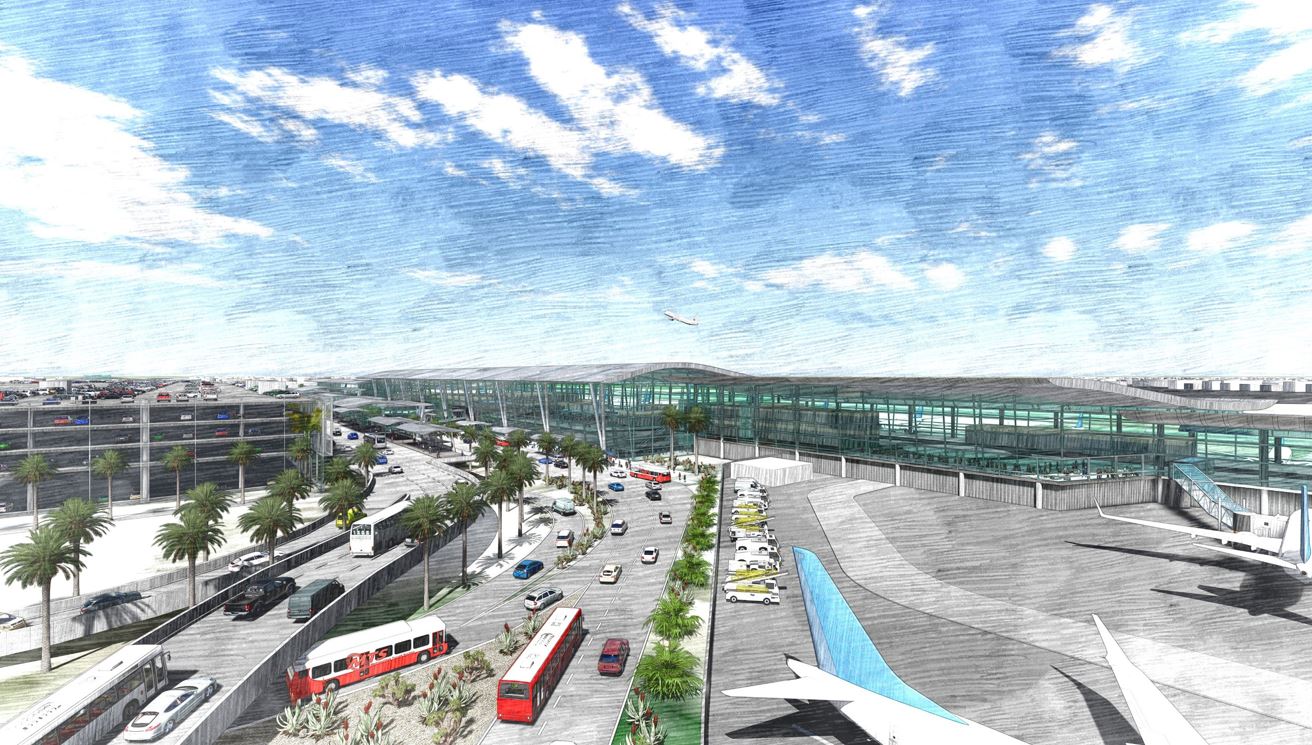 SAN DIEGO, CA, 2021-Mar-17 — /Travel PR News/ — San Diego International Airport’s planned replacement for the aging Terminal 1 will be a unique integration of art and architecture, with the façade being designed by renowned artist James Carpenter.

Carpenter has been selected as the lead artist for the New T1 project. The San Diego County Regional Airport Authority’s Board indicated at the beginning of the process a vision for art to be more than an afterthought in the development of this critically needed project. Rather, it should be incorporated into the design.

“Artists have the ability to enhance the experience of airport customers and the broader community,” said Johanna Schiavoni, Chair of the Airport Authority Board. “That’s why our Board chose an approach to integrate art into the design of the new Terminal 1. More than just a functional airport terminal, this building will be a work of art to elevate the experience of our travelers and our community.”

“The façade will be one of the most highly visible and memorable features of the new Terminal 1,” said Kimberly Becker, President and CEO of the Airport Authority.  “We are very pleased with the selection of highly acclaimed artist James Carpenter as the visionary for this design.”

Carpenter will be an integral member of the Board-approved design-build team, which includes Turner-Flatiron and Gensler. This groundbreaking collaboration is the first of its kind for the Airport Authority. Typically, artists are commissioned to design original works of art inside and outside the building. Conversely, Carpenter and team have been charged with developing a design for the building itself, focusing on its south façade.

The goal of this approach is to develop a design that harnesses the abundance of sunshine San Diego enjoys, creating a warm and welcoming feeling for passengers.

Carpenter and his team aspire to transform the interior of the new Terminal 1 space through a varying play of light and color that occurs throughout the day. Their design will celebrate the changing character of the sky from sunrise to sunset, using a variety of design elements he refers to as “light interventions.”

“We have been seeking ways to bring the unique qualities of light in San Diego into a signature for the building,” said Carpenter. “Our collaboration with Terrence Young and his team at Gensler has been remarkably productive and we look forward to continuing our work to capture and emulate the surrounding warmth and beauty found in Southern California.”

Carpenter and his studio are also committed to sustainability in their practice, which aligns with the Airport Authority’s ongoing focus on environmental stewardship. The new Terminal 1 building design will be climate-resilient and adaptive; and will utilize both renewable electricity and a stormwater capture and reuse system.

In addition to the new terminal, the New T1 project includes improvements to the airfield, sustainability enhancements and new transportation options that make getting to and from the airport easier.

If all goes as planned, construction on the new terminal could begin in early 2022, with completion anticipated by late 2026.

New York City-based artist and designer James Carpenter established his studio, James Carpenter Design Associates, Inc., in 1979 to expand his interest in architecture into a deeper interest in materials, making, and engineering. His career has been focused on an ongoing exploration of light through the use of glass. Some of his major cultural projects include the Israel Museum’s expansion and campus renewal project in Jerusalem (2005-2011) and the Museum at the Gateway Arch in St. Louis Arch (2010-2018).  Major private projects include the Gucci Japan Flagship building in Tokyo (2003-2006) and the “Ice Falls” water feature in the Hearst Tower (2002-2006). His firm is also noted for its activations of public spaces, including designs for New York’s Fulton Center, the monumental “Sky Reflector-Net” (2004-2014), and the exterior envelope and lobby of Seven World Trade Center Tower (2001-2006) in New York.  JCDA has been recognized with numerous awards, including the National Environmental Design Award from the Smithsonian Institution and the American Institute of Architects Honor Award. Mr. Carpenter received a MacArthur Fellowship in 2004 and “The Daylight Award” from the Villum and Velux Foundations in 2010. For more information, please click here.

San Diego International Airport (SAN) is the busiest single-runway commercial service airport in the U.S. and the third busiest airport in California. In 2019, SAN welcomed 25-million passengers and offered nonstop flights to destinations worldwide. The airport is an economic driver for the region, contributing nearly $12 billion in economic activity in 2019 and supports nearly 116,600 jobs. With anticipated passenger growth in the future, the Airport Authority is continuing progress with the New T1 program that will replace Terminal 1 with a larger, more efficient facility and other improvements that enhance the airport experience. The airport is managed and operated by the San Diego County Regional Airport Authority. For more information, please visit san.org.