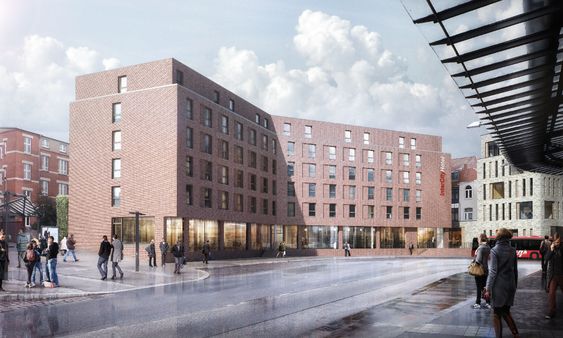 IntercityHotel to open a new build hotel in Lübeck by 2023

Frankfurt am Main, Germany, 2021-Aug-04 — /Travel PR News/ — Lübeck, known as the “City of Seven Spires” for the Gothic churches that punctuate its skyline, is set to become home to an IntercityHotel by 2023. The new build hotel will extend over six storeys and will include 176 rooms, a spacious lobby, a restaurant, a bar and various conference facilities. As is the case with all new generation IntercityHotels, interior design will be by the Italian architect Matteo Thun. The project is being realised as part of the existing cooperation agreement between Deutsche Hospitality and the “Commerz Real Institutional European Hotel Fund”, via which Commerz Real, a property subsidiary of Commerzbank, has acquired the future hotel from the developer GBI.

“We are delighted to be extending the growing IntercityHotel network by establishing a new hotel in Germany’s oldest Hanseatic City in the very near future,” said Lübeck-born Christian Kaschner, Senior Vice President IntercityHotel. “Lübeck boasts around 1,800 listed buildings alongside further numerous sights and museums. All of this provides an attractive destination for leisure travellers. As one of the largest ports on the Baltic Sea, the city also has the status of an important economic location. From 2023 onwards, the IntercityHotel Lübeck will offer guests the chance to visit a further city in northern Germany whilst enjoying all the comfort of an upper midscale hotel together with the benefits of great accessibility and short distances to places of interest.”

The hotel will be located in the very heart of Lübeck at Konrad-Adenauer-Straße 1, right next to the main railway station and bus station and within easy reach on foot of the city’s old quarter, a recognised UNESCO World Heritage Site. Further tourist highlights such as St. Mary’s Church and the Buddenbrook House are both within the immediate vicinity. The historic Baltic resort of Travemünde is around 20 kilometres away via a land route or by boat.

This hotel represents the fourth acquisition made by the “Commerz Real Institutional European Hotel Fund”, an open “Special Alternative Investment Fund” (AIF). A few months ago, the fund procured two IntercityHotels which are about to be erected in the Netherlands, the 115-room IntercityHotel Leiden and the IntercityHotel Breda, which has 174 rooms. The Commerz Real Institutional European Hotel Fund operates in conjunction with Deutsche Hospitality. It takes a risk-diversified approach and buys into European hotel properties on behalf of professional and semi-professional investors.