The growth in November passenger traffic was mainly driven by a 13% year-on-year growth in Hong Kong resident travel. Transfer/transit traffic and visitor traffic grew by 8% and 6% respectively. Passenger traffic to / from Japan and Taiwan recorded the most significant increase.

The decline in cargo was mainly due to a 6% year-on-year drop in transshipment and 4% drop in import, compared to the same month last year.  Amongst the key trading regions, traffic to / from the Mainland China and Southeast Asia registered the most significant drop in the month.

Vivian Cheung, Deputy Director, Airport Operations of Airport Authority Hong Kong, said, “As the year draws to an end, we expect to see a travel peak at HKIA during the Christmas and New Year holidays. Over the period, a total of 135 additional flights will be arranged by the airlines to cope with the surge in travel demand, with the most popular destinations being Taipei, Osaka and Sapporo.”

“To celebrate the joy of the season with passengers from around the world, HKIA has lined up a series of Christmas-themed activities and decorations this year. Magicians from Hong Kong, Korea and Taiwan will surprise passengers with mystifying sleight of hand at the Meeters and Greeters Hall, while an instrumental flash mob performance adds to the gleeful festive spirit. Passengers at the Departures Hall will also be treated to flash mob A Cappella Christmas carols performed by students from The Hong Kong Academy for Performing Arts,” added Mrs Cheung.

Programme of Christmas activities at HKIA 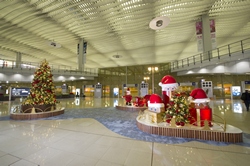