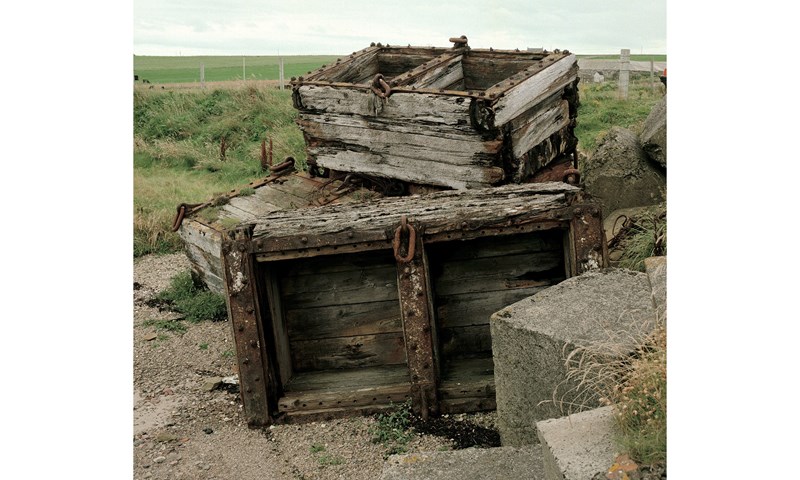 Detail of concrete block holders, used to construct the barriers.

Second World War structures recognised as being of national importance

The barriers were constructed during World War Two as a defensive measure to prevent enemy ships and submarines from entering Scapa Flow, which housed the bulk of Britain’s fleet at the time. The move was ordered by Prime Minister Winston Churchill in response to the sinking of the HMS Royal Oak in Scapa Bay in October 1939, by a German submarine, which was able to evade the ineffective submarine defences in place at the time.

The solid causeways prevented access from the east into the four channels leading to Scapa Flow. Today the barriers provide a vital road link from the Orkney mainland to South Ronaldsay.

There are four barriers in total, two of which will be listed at Category A – the highest status for listing. This means that they are recognised as being of national or international importance. Only around 8% of Scotland’s 47,000 listed buildings are recognised at this category.

Elizabeth McCrone Head of Designations at Historic Environment Scotland, said: “Travelling through Orkney now, it’s hard to imagine the islands as they were in late 1939, as a bustling naval base, living in constant fear of German U-boats getting past the inadequate block ship and net defences. It must have come as some relief when Winston Churchill gave the order to construct the barriers.

“Nowadays, the original function as defensive barriers is a distant memory, but their importance remains. They serve as a tangible reminder of Orkney’s past. The listing recognises their fascinating history and will help to keep the features which make them a unique and significant part of the island’s history, while still ensuring that they continue to be a vital transport link between the islands.”

James Stockan, chair of Orkney Islands Council’s Development and Infrastructure Committee, said: “The Churchill Barriers are as important today as when they were first built, providing lifeline links between three of our inhabited islands.

“They are recognised worldwide as unique monuments that serve as a powerful reminder of Orkney’s wartime past. It is fitting that those listed by HES now have the same status as other historic structures such as St Magnus Cathedral, Balfour Castle and the North Ronaldsay sheep dyke.

“Barriers 1 and 2 are, of course, equally important. It is welcome that we have time to explore interest among developers in the two Barriers forming part of a tidal energy generation project, along with ways to address wave overtopping during severe winter weather.

The Barriers’ crucial role in linking Orkney Mainland, Burray and South Ronaldsay is clearly recognised by HES and the listing will have no impact on the Council’s ability to look after the roads that cross the causeways. I welcome the recognition they have been given.”

Building long fixed barriers across bodies of tidal water presented unusual engineering requirements in the mid-20th century. In this period, solid causeways were not a normal response to civilian transport needs, with bridges or ferries usually preferred when open water had to be crossed. The barriers’ designers had to take account of the fast flowing tidal water in narrow, but relatively deep channels. The barriers were designed to withstand a 4-5 knot tidal current.

The barriers were ingenious in their construction. Built using bolsters, these wire cages or baskets were filled with broken rock and then dropped into the water of the channel. Most of this deep structure is underwater. A road carriageway formed from dumped aggregate and horizontally laid concrete blocks overlies the causeway base. In total, all four barriers required about 250,000 tons of stone rubble and 66,000 concrete blocks.

Churchill Barrier number Three is about 420m long and links Glimps Holm and Burray. Number Four is about 650m long and links Burray and South Ronaldsay. The scheme to build them was designed and supervised by Sir Arthur Whitaker, Civil Engineer-in-Chief of the Admiralty. The contractors were Balfour Beatty & Co Ltd. Italian prisoners of war who were interned at Lamb Holm formed part of the workforce that made the concrete blocks and built the structure.

Year of Innovation, Architecture and Design 2016