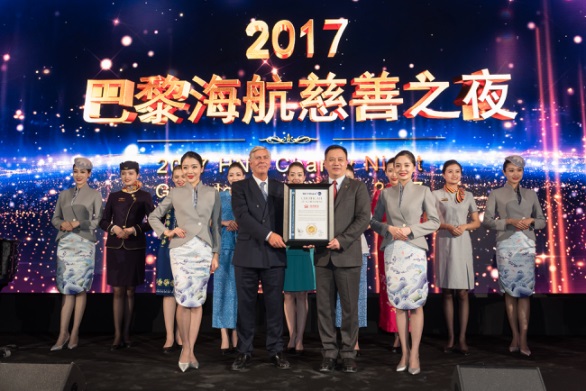 Hainan Airlines named one of the top ten airlines by SKYTRAX

Paris, France, 2017-Jun-30 — /Travel PR News/ — Hainan Airlines, a leading global airline and a subsidiary of HNA Group, a global Fortune 500 company focused on tourism, logistics and financial services,today announced that it has been named one of the top ten airlines by SKYTRAX, a specialist advisor to the air transport industry. The announcement was made at HNA Charity Night, an event hosted by Hainan Airline’s parent company, HNA Group, on June 26, 2017 at the Petit Palais in Paris.

Considered the industry’s most authoritative ranking, SKYTRAX’s ratings, reviews and awards are based on a comprehensive global passenger survey, where passengers rate airlines’ products and services, including in-flight entertainment, onboard food services, and other options and features. Singapore Airlines, All Nippon Airways and Emirates are among the leading international carriers that have received the SKYTRAX designation.

Sun Jianfeng, Hainan Airlines President, said, “It is an honor to be recognized as one of the top airlines in the world. We are pleased that our dedication to providing world-class services and experiences to our customers has been recognized by SKYTRAX. As we celebrate our 24th anniversary, we remain committed to delivering the most enjoyable and safest experiences for our customers, on the ground and in the air, that combine the highest standards of international excellence with our unique Chinese heritage and longstanding focus on hospitality.”

Hainan Airlines is a seven-time recipient of the SKYTRAX five-star airline award, which recognizes the highest standards of airport and onboard product provided by an airline to customers, together with consistent and high standards of front-line staff service across the airport and onboard service environments. It has also been ranked third on the Jet Airliner Crash Data Evaluation Centre (JACDEC)’s 2016 list of the World’s Safest Airlines. This ranking is the best ever achieved by a Chinese carrier.

Committed to constantly improving the air travel experience, Hainan Airlines is pleased to have recently introduced a number of enhancements for its valued customers including, the rollout of the Boeing 787-9 aircraft equipped with Wi-Fi technology and upgraded business class cabins with the Reverse Herringbone Seat layout.

Hainan Airlines has also partnered with Michelin-starred chefs to create an exclusive menu for its “Hai Chef” service, providing passengers with unprecedented quality in terms of in-flight food and an air travel experience. Hainan Airlines also incorporates the highest caliber of design and luxury into the travel experience, including an international VIP lounge, the HNA Club, designed by renowned Hong Kong designer Dr. Patrick Leung. This year, Hainan Airlines will partner with world-renowned haute couture designer Laurence Xu in the design of its fifth-generation uniforms, to be showcased in the finale at this year’s Paris Haute Couture Fashion Week, as part of HNA Paris International Week.

About Hainan Airlines:
Founded in January 1993, Hainan Airlines Holding Co., Ltd has become one of the ten safest airlines worldwide, and one of the seven airlines in the world to be rated Five Star Award by Skytrax. We are devoted to providing passengers with comprehensive flight services. Hainan Airlines’ fleet is mainly composed of Boeing 737 and 787 series aircraft and the Airbus 330.