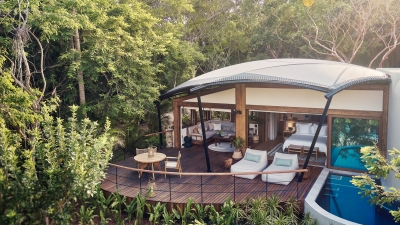 Toronto, Canada, 2023-Jan-25 — /Travel PR News/ — Leading luxury hospitality company Four Seasons continues to expand its development pipeline, elevating its experiential offerings and accelerating bold new ventures that capitalize on the company’s strong business foundation and singular focus on the luxury segment. Through the lens of unmatched guest-centricity and personalization, Four Seasons is investing in a robust commercial strategy, enhancing its ability to meet the growing demand for travel and luxury experiences.

In October, the company appointed Alejandro Reynal as President and CEO, marking a new chapter that builds on Four Seasons renowned legacy and leadership position within the luxury hospitality industry.

“Since joining Four Seasons, I have seen firsthand the company’s clear competitive advantage: unparalleled service excellence, a renowned brand and a corporate culture powered by the genuine heart of its people,” says Reynal. “Four Seasons business is stronger than ever. Our experienced leadership team is well positioned to take advantage of the myriad opportunities ahead, focusing on an evolved growth strategy that continues to generate value for our hotel owners, employees, guests and residents.”

Reynal continues: “True luxury should always represent the authentic expression of personalization. At Four Seasons, this has always been our brand promise, and it inspires our people in every interaction. We continue to invest in our capabilities, empowering our teams with the tools they need to enhance the guest experience and elevate the genuine service that has always been our hallmark.”

For more than 60 years, Four Seasons has been defining the art of luxury hospitality, with an enviable global portfolio of 126 luxury hotels and resorts and 53 branded residences. In 2022, Four Seasons opened seven exceptional new properties, including new hotels and residences in Fort Lauderdale, Minneapolis and Nashville, as well as two new resort experiences in Mexico, in Tamarindo, and with the opening of its first tented-resort in North America at Naviva, Punta Mita, A Four Seasons Resort. The company also expanded its growing collection of standalone Private Residences with new offerings in Marrakech and Dubai, providing discerning homeowners the opportunity to live with Four Seasons outside of a hotel or resort.

Four Seasons has more than 50 new projects under planning or development, including in Italy, Spain, China, Japan, Saudi Arabia, Colombia, Belize and many more, expanding and strengthening relationships with new and existing owner partners with each new property it opens. In the year ahead, the company will expand its offerings with two new planned hotel openings in China in Suzhou and Dalian; and projects in the Middle East including new residences in Bahrain Bay, a second property in Doha, and a new hotel in Rabat, Morocco.

Four Seasons recently announced upcoming projects that will further distinguish its global portfolio, from a historic legend in Venice to soaring new towers in Melbourne and Xi’an. In addition, the Middle East continues to be a market of key growth, with upcoming projects in Jeddah at the Corniche, Diriyah, New Cairo Capital at Madinaty, Luxor and Muscat.

You may also be interested in:  Experience the World in Style: MSC Cruises Launches Industry-First Simultaneous World Cruises

Residential continues to be a significant driver for Four Seasons strategic growth, with a robust five-year pipeline comprising more than 30 projects worldwide.

Central to Four Seasons residential growth strategy is the expansion of its standalone offerings. Since the first standalone opening in London in 2018, the offering has expanded to Los Angeles, San Francisco, Marrakech, and Dubai, the latter selling out prior to going to public sales. Upcoming openings are slated in Lake Austin and beyond.

Taking to the Skies, Seas and Roads with Four Seasons

In addition to new hotel and residential openings, Four Seasons has expanded its experiential offerings to provide guests new and distinctive ways to engage with the brand, including the Four Seasons Private Jet Experience, At Home Collection, and the recently announced Four Seasons Yachts. A collection of nearly 600 restaurants and bars worldwide and 126 spas also extends the Four Seasons experience, welcoming a growing segment of repeat local guests. Four Seasons restaurants and bars are built upon best-in-class, innovative concepts that are brought to life by craftspeople who share a passion for incredible service and exceptional culinary offerings.

In the skies, guests can experience the brand’s legendary service aboard the Four Seasons Private Jet Experience. Late last year, an all-new jet – designed with input from past guests – took flight, taking guests on bespoke journeys around the globe. With 2023 itineraries nearly sold out and a full calendar of 2024 journeys just announced, the program continues to grow.

In September 2022, Four Seasons announced the introduction of Four Seasons Yachts. With the first vessel anticipated to embark in 2025, the 679-foot (207 metre) yacht will offer an unprecedented level of personalized service, with a 1:1 guest to staff ratio, and expansive, residential-style suite accommodations among many other on-board amenities.

You may also be interested in:  Cathay Pacific announces return of its elevated First class service

Following the success of the inaugural Beyond by Four Seasons driving journey in Tuscany in 2022, new and exciting itineraries will be unveiled later this year giving travellers the opportunity to explore exceptional destinations behind the wheel of a classic or modern luxury sportscar.

Across every touchpoint, on the ground, in the sky and soon on the seas, guests will enjoy the genuine, personalized service and care delivered by Four Seasons more than 60,000 employees worldwide, and for which the brand has been renowned for more than 60 years.