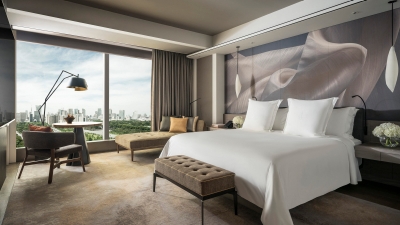 Soaring above busy streets in a landmark tower with sweeping views of the city and beyond, the new Four Seasons reflects Tokyo’s 24/7 energy and modern lifestyle

Tokyo, Japan, 2020-Jan-29 — /Travel PR News/ — Facing the Imperial Palace Gardens and with Mount Fuji visible in the distance, Four Seasons Hotel Tokyo at Otemachi is poised to become the next level of luxury in this ever-changing city, honouring its illustrious past as it boldly looks to the future.  The all-new Hotel is now confirming reservations for arrivals beginning July 1, 2020.

“Four Seasons at Otemachi showcases next-generation luxury and lifestyle as we quite literally elevate the hospitality experience to a new level in the city,” says Rainer Stampfer, Four Seasons President, Hotel Operations – Asia Pacific.  “Paired with Four Seasons Hotel Tokyo at Marunouchi, our well-established hotel in the nearby Central Station district, we are truly spoiling our guests for choice in one of the world’s most dynamic destinations.”

House with the top six floors of a new, 39-storey tower by Skidmore, Owings & Merrill, Four Seasons at Otemachi is both a restful haven for travellers and a magnet for the city’s sky-high social scene, with four distinctly original dining and drinking concepts – three of which are designed by renowned SPIN Design Studio –  as well as an top-floor spa sanctuary and 25 metre (82 foot) pool.

A feast for the senses, the Hotel’s interiors evoke an origami-like sense of discovery through layered design motifs envisioned by interiors firm Denniston.  Lead designer Jean-Michel Gathy was inspired by Issey Miyake’s flowing fabrics as captured by photographer Namiko Kitaura, to be seen throughout the Hotel’s public areas, in the stunning spa lobby, and across the walls of 190 guest rooms and suites.

Dining and Drinking in Urbane Style

Led by Executive Chef Marco Riva and culinary sensation Yusuke Aoki in the pastry kitchen, guests can expect artistry on the plate and the palate, amid the visual and aromatic delights of Tokyo-based floral artist Nicolai Bergmann. Restaurants and bars at Four Seasons at Otemachi include Est, presenting the innovative French cuisine combined with Japanese precision of Michelin-starred Chef Guillaume Bracaval; Pigneto, a relaxed Italian dining experience with four show kitchens and an outdoor terraza facing the Imperial Palace Gardens; Virtù, a unique bar concept perhaps best described as contemporary Tokyo meets Old World Paris; and The Lounge for indulging in teatime traditions with a fresh twist of Japanese and French tastes.

“I am particularly excited to introduce our guests to our high concept restaurants and lounges,” says General Manager Andrew De Brito.  “As each space takes shape, we can already imagine them filled with an eclectic mix of locals and international visitors, with the city spread out beneath us.”

Ideally located for business travellers within Tokyo’s financial district, the Hotel’s namesake Otemachi Station, one of the city’s largest subway hubs, is directly accessed from the Hotel, allowing leisure guests to venture into the city easily, with the expert concierge team’s recommendations and guidance firmly in hand.

Be Among the First to Experience the New Four Seasons Hotel Tokyo at Otemachi: In anticipation of its grand opening this summer, the Hotel is offering in Introductory Offer package featuring 15 percent savings on the room rate, food and beverage and spa and JPY 10,000 Hotel credit with a minimum three nights stay.  This offer may be booked online.

Exemplary Four Seasons service, from event conceptualisation through meticulous execution, assures meeting planners, event hosts and wedding couples a worry-free experience from start to finish.  With more than 1,300 square metres (14,000 square feet) of event space including a ballroom and four smaller meeting rooms on the building’s 3rd floor available, Four Seasons can host events for up to 600 guests.

About Four Seasons in Japan