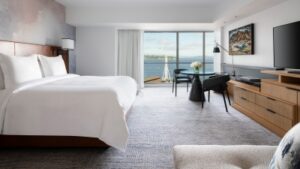 Seattle, U.S.A., 2021-Feb-18 — /Travel PR News/ — Four Seasons Hotel Seattle was recognised with the prestigious Five-Star award in the 63rd annual Forbes Travel Guide awards. The Spa at Four Seasons Hotel Seattle also received its Four-Star Spa distinction for the ninth consecutive year. Both the Hotel and Spa have the highest and only Forbes Star awards in their respective categories in the state of Washington.

Hotel also took home the number one spot for the Best Hotel in Seattle and Washington State in the recently announced “Best Hotels” from U.S. News & World Report. Four Seasons Hotel Seattle scored in the top 10 percent of the Best Hotels in the USA and earned a Gold badge.

“Our employees truly deserve the recognition as they have gone above and beyond to make every guest’s experience memorable,” says Angelica Palladino, General Manager of Four Seasons Hotel Seattle. “One of the Forbes standards emphasises graciousness, thoughtfulness and personalised service. Our team continues to show these amazing qualities despite challenges they have come across. They are the best of the best.”

To inspire moments of travel, the Hotel is celebrating with the lowest rates of the season between March 1 and 7, 2021.

“We give you more than one way to take a moment to care for yourself and your loved ones with Seattle’s only outdoor heated pool, Forbes 4-Star rated spa, and indoor and outdoor dining at Goldfinch Tavern,” adds Palladino.

Coupled with the ideal location next to the Seattle waterfront and spacious guest rooms and suites with views of Elliott Bay, Four Seasons Hotel Seattle is the number one choice in the city. In addition, Four Seasons continues to invest in its award-winning App and Chat that further allows guests to control how they engage with others – limiting face-to-face interactions while maintaining the highest levels of personal service.

“We have all faced tremendous pressure, as well as hope, in these trying times and our team continued to come together and take care of our guests, residents and each other through our Lead With Care health and safety program,” says Palladino.

With eight private treatment rooms and enhanced hygiene practices such as stand-alone HEPA air purifiers with UVC disinfection and reduced capacity to promote physical distancing, The Spa provides a safe haven to relax and rejuvenate.

For a detailed explanation of how Forbes Travel Guide compiles its Star ratings, click here. To learn more about Four Seasons Hotel Seattle; The Spa; or Goldfinch Tavern visit the Hotel online or following along at @FSSeattle and @GoldfinchTavern.