Four Seasons is the only London property to be awarded Five Stars for both the Hotel and its Spa.

2013-04-25— /travelprnews.com/ — Forbes Travel Guide has launched its inaugural London Star Awards naming Four Seasons Hotel London at Park Lane the only award winner to receive a much-coveted Five-Star rating for both the Hotel and its Spa.

Forbes Travel Guide, formerly Mobil Travel Guide, has provided the travel industry’s most comprehensive hotel, restaurant and spa ratings since 1958. “Our first London ratings announcement marks our entry into the European market and continues to establish Forbes Travel Guide as the global benchmark for the highest standards in hospitality service and facilities,” says President and COO Michael Cascone.

Four Seasons General Manager and Regional Vice President John Stauss comments, “This is an outstanding honour for Four Seasons Hotel London at Park Lane and The Spa at Four Seasons to have received not one, but two, Five-Star ratings from the prestigious Forbes Travel Guide. We could not be more delighted and, as proud as we are already of our spectacular Hotel and Spa, to have earned such high recognition from the Forbes inspectors and reviewers in their inaugural London Star Awards is a supreme accolade.” 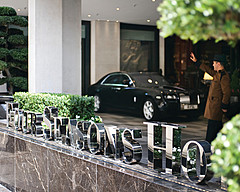