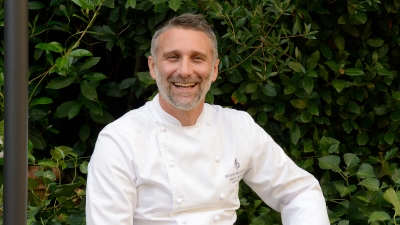 Florence, Italy, 2021-Oct-06 — /Travel PR News/ — Michelin-starred Restaurant Il Palagio reopened since October 1, 2021, from Tuesday to Saturday, offers Tuscan-contemporary cuisine and a brand new selection of dishes. Upon his arrival at Four Seasons Hotel Firenze, Chef Paolo Lavezzini took a long walk in the Hotel’s Gherardesca Garden, the largest private park in the centre of Florence, discovering all its varieties of plants, colours, trees and scents. The garden served as inspiration for his new six-dish tasting menu.

Clients are welcomed with a special aperitivo box reminiscent of a jewelry case that includes a selection of snacks with flavours and shapes inspired by the Gherardesca Park. The menu starts with an unexpected appetiser, marinated eggplant with pecorino, tomato and rhubarb ice cream, and continues with the bittersweet and fresh Mediterranean amberjack with apple, butter and endive. Lightly smoked risotto with seasonal cabbages blends different varieties and textures of cabbage with smoked butter, and agnolotti stuffed with guinea fowl, Parmigiano Reggiano cream and porcini mushrooms recalls Paolo grandmother’s comfort food recipes on his childhood’s Sunday mornings. Braised shoulder of lamb with wild licorice and pickled grapes represents Tuscany territory and green apple and lime ingot with extra virgin olive oil, basil and almonds pesto closes the tasting menu.

The full menu includes other intriguing dishes that reflect the Chef’s experience and philosophy. Both the free-range crunchy eggs, porcini mushrooms with candied lemon and garlic, and the wild steamed sea bass with carrots, seaweed and citrus pepper represent his emphasis on natural and organic suppliers. The free-range eggs are from a farm near the property, and fresh fish is delivered every morning from the Livorno port. Among the meat recipes is the traditional wild pigeon with beetroot, dolce forte and pollen from the Apennines as well as a dish that Lavezzini brought back from his long experience in Brazil, slow cooked Tuscan pork with black cabbage, green banana and chili.

“My cuisine is defined by seasons, producers and ingredients. We have worked hard to select the best suppliers, who respect the environment and work ethically. Going from there, we have conceived recipes representing the Tuscan territory, with a menu that changes often following seasonality,” explains Paolo Lavezzini, Executive Chef. “My main aim in designing the Palagio experience is to take people on a discovery of Tuscany in all its facets and subtleties. For example, the bread is a whole loaf made with different wheats based on seasons, to share between diners, and the menu offers a unique balance of contemporary and traditional elements, with some unexpected combinations as well as authentic flavours.”

A native of Emilia Romagna, a region known as the bread-basket of Italy, Paolo Lavezzini decided he wanted to become a chef when he was a child. He says, “I realise this is an Italian cliché, but I cannot help but say that I was inspired by my grandmother, who raised me. I remember waking up with the scent of tomato sauce and seeing pots on the stove and windows fogged up with condensation.” After a brief stint as a soccer player, he had his first experience in the best fine restaurants on the Tuscan coast when he was only 16 years old. He later honed his culinary skills in some of Europe’s most prestigious Michelin-starred restaurants including Alain Ducasse*** at the Plaza Athénée in Paris, and Enoteca Pinchiorri*** in Florence where he worked for seven years. Lavezzini was chef at the Plaza de Russie in Viareggio (Lucca), while in 2012 he moved to Brazil as executive chef for the 5 star luxury Hotel Fasano in Rio de Janeiro. The hotel’s restaurant was recognised as “the best Italian restaurant” in Brazil. In 2018 Lavezzini joined the former Four Seasons Hotel São Paulo as part of its preopening team and led the restaurant Neto as Executive Chef. He defines himself “Italian by heart, Brazilian by soul.” His cuisine philosophy has been influenced by his origins from Emilia Romagna and by his several fine-dining experiences in Tuscany, but has been strongly enriched by his period in Brazil. When in Brazil, he was introduced to “a Brazilian fire,” a plethora of ingredients and flavours, and he experimented with combining Brazilian traditions and ingredients with Italian ones. There, he also discovered the importance of choosing organic producers, honouring seasonality and following the path of sustainability.