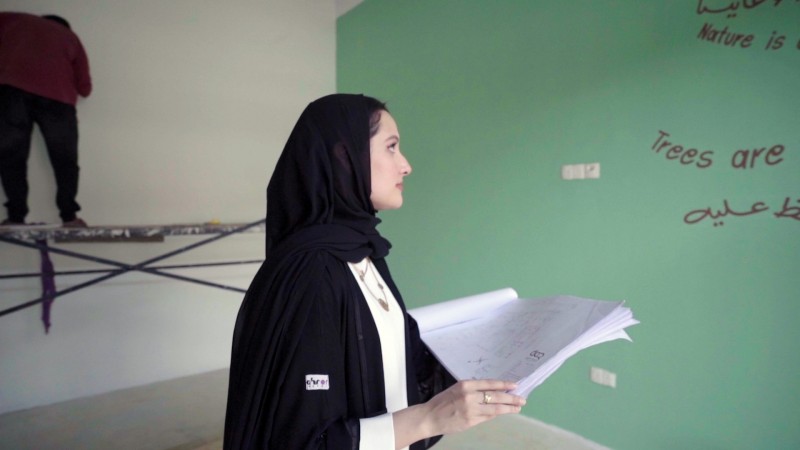 The Arctic is home to massive ice sheets that house polar bears, Svalbard reindeer and puffins, along with an abundance of other flora and fauna. One of the most untouched, pristine places on the planet, this fragile ecosystem is undergoing accelerated levels of climate change and rising temperatures. The impact of global warming on the Arctic has resulted in rising sea levels, irregular weather patterns across the Northern Hemisphere as well as loss of vital biodiversity.

Ameera travelled in June 2019 on a six day journey as a Climate Force Global Ambassador with the 2041 Foundation, under the ‘Leadership on the Edge Programme’. The foundation’s mission is to inspire and engage young people, business leaders and politicians around the need to take environmental action, now. Emirates supported Ameera, Maitha Al Zaabi and Shurooq Al Sharhan to travel to Norway and begin their Arctic expedition. This was Ameera’s third expedition, after travelling to Antarctica in 2015 and 2016.

While on the expedition, Ameera and her companions saw first-hand the melting of glaciers and breaking chunks of icebergs. Plastic pollution and marine debris had also made their way to the Arctic, affirming the urgency to take action and combat the effects of climate change.

After each expedition, Ameera reaches out to local schools and universities around her expedition experiences to help inspire the next generation of environmental leaders, through monitoring natural resources consumption, using renewable energy, recycling and adopting sustainability practices. For Ameera, it’s the small changes that help make an incremental impact.

Ameera also wanted to find other ways to make a difference, which spurred the idea of opening a green laundry shop, with the aim of using eco-efficient appliances, biodegradable detergents and a host of other measures to mitigate the business’s impact on the local UAE environment. Her green business is the first of its kind in Ras Al Khaimah, and she hopes to inspire other entrepreneurs to follow.

Emirates provided support for the Emirati mission to the Arctic as an extension of its commitment to conservation activities and preservation of biodiversity around the world. Sustainability and the environmental future of the planet are issues that are core to the airline’s long term objectives.

The airline continues to champion wildlife conservation by supporting and preserving biodiversity and rebuilding fragile ecosystems through the Dubai Desert Conservation Reserve and Emirates One&Only Wolgan Valley in Australia.

Additionally, Emirates invests in efficient aircraft and smarter flying techniques that minimise fuel consumption, as well as working to reduce single-use plastics on onboard and installing solar panels to supplement energy requirements.