São José dos Campos, Brazil, 2016-May-27 — /Travel PR News/ — The E-Jets E2 program reached another important milestone today with the completion of the maiden flight of the E190-E2. The flight was originally scheduled to take place during the second half of this year.

The aircraft took off at 1:06 p.m., local time from Embraer’s facility in São José dos Campos and flew for three hours and 20 minutes. The flight occurred just three months after the E190-E2 made its public début at a rollout ceremony at the factory in late February. The inaugural flight marks the beginning of the certification campaign for the E190-E2, the first of three new second-generation E-Jet models. The E190-E2 is scheduled to enter commercial service in 2018.

“A first flight is always an emotional occasion, no matter how many you witness over the years. In this particular case, we are not only keeping our promises to the market, we are going beyond by being a few months ahead of schedule. I want to thank each and every Embraer employee who is participating in this project,” said Frederico Fleury Curado, Embraer President & CEO.

“What a first flight! Today, all of us at Embraer should be proud and thrilled of this remarkable achievement. Watching the first E190-E2 take to the skies means we are paving the way for a bright future in commercial aviation. I’m certain that the market will show even greater interest not only for E190-E2, but also for the other E2s as well,” said Paulo Cesar Silva, President & CEO, Embraer Commercial Aviation.

Embraer Captain Mozart Louzada commanded the aircraft along with First Officer Gerson de Oliveira Mendes, and Flight Test Engineers Alexandre Figueiredo and Carlos Silveira. Today’s flight evaluated aircraft handling and performance characteristics with the crew analyzing a significant number of flight parameters, including speed, altitude and landing gear retraction. This was made possible by the high level of maturity that the E2 reached during program development through the extensive use of digital modeling simulations and ground and static tests that employed rigs and an iron bird.

“There are always a lot of expectations with a first flight and todays’ was no exception. The flight was very smooth. We were able to significantly open the flight envelope by flying at mach 0.82, climbing to 41,000 feet and retracting the landing gear and flaps, and engaging the fly-by-wire in normal mode. All of these demonstrate that the E190-E2 project is very mature and robust, and exceed all performance targets” said Captain Louzada.

Since the E-Jets E2s were launched in June 2013, the program has logged 640 commitments from airlines and leasing companies: 267 are firm orders and 373 are options and purchase rights. The E-Jets family of aircraft is the leader in the up-to-130-seat aircraft category with more than 50% worldwide market share. Embraer E-Jets are currently in service with some 70 customers from 50 countries.

E-Jets E2s represent the best of new technology in a proven platform. The application of advanced technologies for engines, wings, and avionics sets the E2s apart by providing airlines with the most efficient airplanes in the category yet maintaining commonality with current-generation E-Jets. Enhancements include new aerodynamically-advanced high-aspect ratio distinctively-shaped wings, improved systems and avionics, 4th generation full fly-by-wire flight controls, and Pratt & Whitney’s PurePowerTM Geared Turbofan high by-pass ratio engines (PW1700G on the E175-E2, PW1900G on the E190-E2 and E195-E2). These combine to generate double-digit reductions in fuel consumption, emissions, noise, and maintenance costs, as well greater productivity though less scheduled maintenance downtime. E-Jets E2s will achieve similar costs per seat as larger re-engined narrow-body aircraft but with significantly lower costs per trip. Those savings will create new opportunities for lower-risk development of new markets and fleet right-sizing. 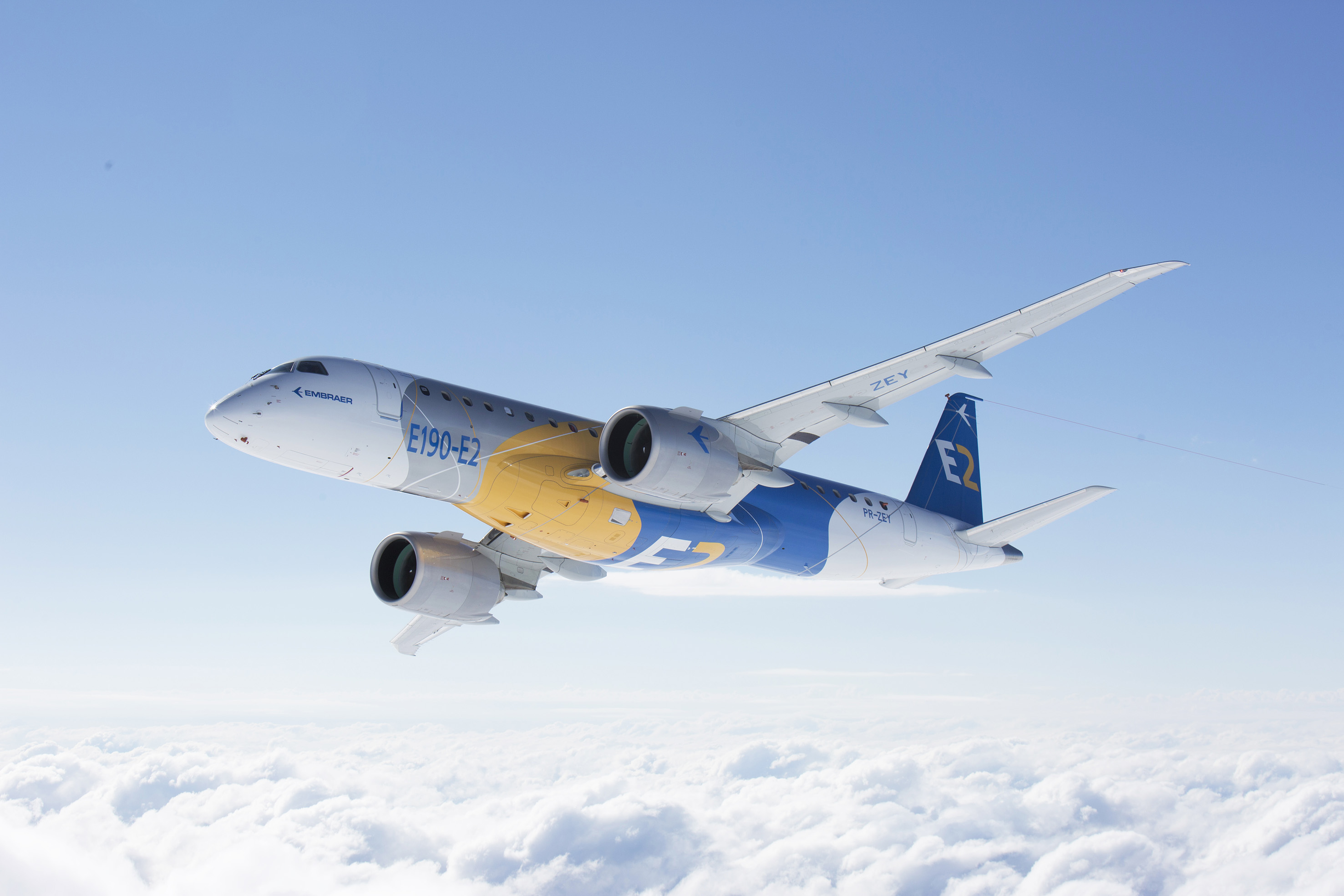 Embraer announces the completion of maiden flight of the E190-E2