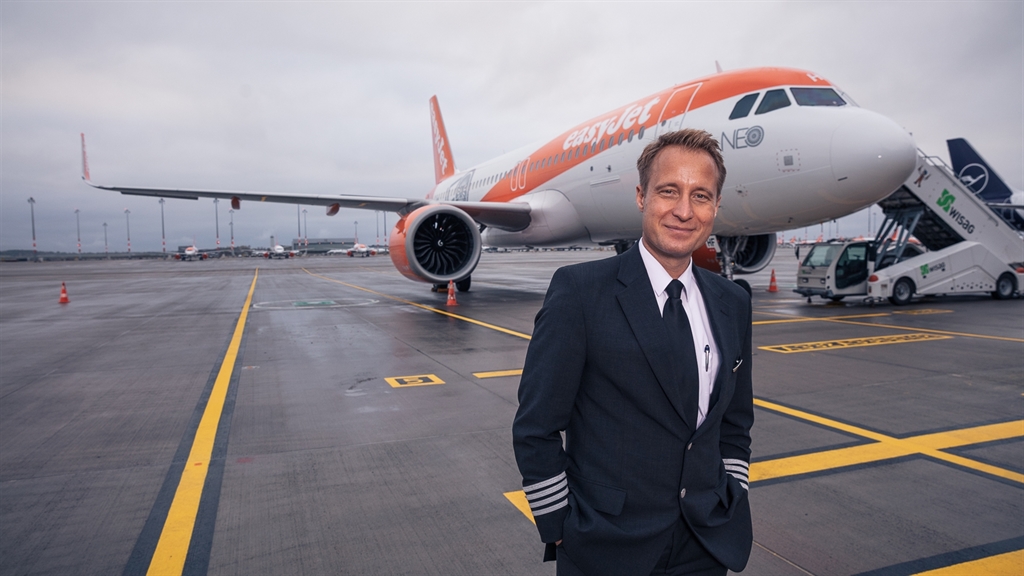 Berlin, Germany, 2020-Nov-03 — /Travel PR News/ — As the largest airline based in Berlin-Brandenburg, easyJet today (OCTOBER  31 2020) opens a new chapter with the opening of Berlin Brandenburg Airport “Willy Brandt”. The first easyJet aircraft, special flight EJU 3110, was the first to land on time at 2pm at the new airport.

The fuel-efficient Airbus 320neo was ceremonially welcomed with a water salute and by representatives from politics, industry and media. Tomorrow, on 1 November, easyJet will again achieve a first, as its flight to Gatwick at 06:45 will start commercial operations at BER.

easyJet today also announced a new cooperation between easyJet and Deutsche Bahn as part of the “Worldwide by easyJet” programme. The tie up will ensure convenient transfers between flights and trains in future. The airline’s unique connection will soon be available and easyJet customers will be able to seamlessly connect to Deutsche Bahn trains, initially via Berlin, by combining plane and train tickets into one single booking. They will thus benefit from security in the event of missed connections and smooth transfers. Plans to extend the cooperation to other destinations are underway.

The easyJet Worldwide program enables customers to connect easyJet flights with other flights across its own network as well as with flights operated by partner airlines. The network of more than 5,000 departure and destination points booked in combination with partner airlines is growing continuously.

“As Berlin’s largest carrier we are really excited to move all of our Berlin-based operations under one roof at BER. We have a long history in the Berlin Brandenburg region, operating flights since 2004 and consistently expanding our base with over 12 million passengers flying to and from Berlin with us last year alone.

“After months of preparations, we are ready and proud to be the first airline to start commercial operations at ‘Willy Brandt’ airport tomorrow. Our customers will benefit from an improved experience in Terminal 1 with easy connections between flights and rail including with our new Worldwide by easyJet partner Deutsche Bahn.

“Despite the pandemic, we remain committed to sustainable flying now and in the future through our partnerships with Airbus and Wright Electric where we are focusing on the development of hybrid, all-electric and hydrogen technologies. In the interim, we continue to offset the CO2 emissions from the fuel we use.

“So we look forward to continuing to make an important contribution to the region – connecting the vibrant city of Berlin and wider region with the major cities and holiday destinations in Europe for many years to come.”

With the relocation of its Berlin Brandenburg fleet from Tegel and Schönefeld to BER, easyJet now connects the metropolitan region directly from the new main terminal (Terminal 1) to all of Europe. In addition to its shops and spacious architecture and its good rail and public transport connections, the new airport offers its customers an enhanced customer and travel experience. In addition, easyJet Plus customers at BER can use the fast-track security checkpoint, saving valuable time in the check-in process. For easyJet itself, operational processes are simplified as the Airbus fleet and crew are now under one roof, making flight operations even more efficient. The first commercial flight – coming from Fuerteventura – will land at BER this evening at 20:05.

Since June this year, easyJet has had its first maintenance station outside the UK on the south pier of BER. This is where the fleet based at BER is routinely maintained and serviced (Line Maintenance according to EASA Part-145). Smaller ad-hoc repairs on other easyJet aircraft as well as Covid-19 maintenance are also carried out by a 50-person easyJet on-site team. The company expects that the in-house maintenance will result in an efficient and cost-effective process. easyJet is thus once again demonstrating its commitment to the Berlin-Brandenburg region and its German base.

easyJet’s commitment to the Berlin-Brandenburg base

Continued expansion of the European route network. In total, the airline has flown around 75 million passengers to and from Berlin-Brandenburg since 2004.

In 2019, the 34 aircraft stationed in Berlin-Tegel and Berlin-Schönefeld completed up to 250 flights per day. In terms of the 12 million passengers, this corresponds to a market share of approximately 35 per cent.

easyJet employs over 1,000 people at its BER base with local employment contracts governed by collective bargaining agreements and opened its own maintenance station on the south pier of BER in June this year.

In a six-month trial operation with Berlin Brandenburg Airport and the easyJet partner companies, the airline put the new BER airport through its paces in various scenarios over a total of 47 trial days with around 400 test flights handled at 60 gates.

Next year easyJet plans to offer up to 70 routes from Berlin Brandenburg Airport (BER).

easyJet is one of the largest customers of the Airbus A320neo in Europe. The neo brings significant environmental and operational benefits – up to 15 percent savings in fuel burn and CO2 emissions, and a reduced noise footprint of 50 percent on take-off and landing phase. Crucially, this means the quieter aircraft minimises its noise impact on local communities.

easyJet flies on more of Europe’s most popular routes than any other airline and carries more than 96 million passengers annually – more than 16 million travelling for business. easyJet flies over 334 aircraft on 1061 routes to 159 airports across 36 countries. Over 300 million Europeans live within one hour’s drive of an easyJet airport.

In Berlin Brandenburg, easyJet has been stationing aircraft since 2004, establishing its first base outside the UK. The first flights at that time were from Berlin-Schönefeld to London Luton and Liverpool. Since then, the airline has steadily expanded its operations in the capital and has also been flying from Berlin-Tegel since 2018. With a market share before the pandemic of 35 per cent in terms of passenger numbers (250 flights per day), easyJet is the “home carrier” and the largest airline in Berlin-Brandenburg. With more than 1,000 employees with local contracts, it makes an important contribution to connecting and developing the metropolitan region. A total of 75 million passengers have flown with easyJet to and from Berlin since 2004. Last year alone, we carried 12 million customers to and from Berlin. In the coming year, easyJet is planning up to 70 routes from Berlin Brandenburg BER Airport. The relocation of all aircraft previously based in Berlin-Tegel (TXL) and Berlin-Schönefeld (SFX) to BER will be completed by the end of today (31 October). As part of the official flight schedule, they will fly their last flight home in the evening to Terminal 1 (T1) of the Capital Airport, thus arriving at their future home base.

Worldwide by easyJet launched in September 2017 enabling customers to connect easyJet flights through London Gatwick to long haul flights. It is the first global airline connections service by a European low fares airline. Worldwide by easyJet offers self-connect and sales partnerships through a digital, virtual hub simply and efficiently. Worldwide by easyJet now connects at all easyJet airports across its network – with 17 partner airlines across Europe. easyJet has leadership positions at more of Europe’s major airports and flies on more of Europe’s 100 largest routes than any other airline which makes it the most attractive European short haul airline partner. This connectivity is enabled by technology partner Dohop whose innovative platform allows easyJet customers to book connections and forward flights on easyJet.com. Worldwide by easyJet will also allow easyJet passengers to connect with other easyJet flights through partner airports. Worldwide by easyJet does not impact easyJet’s punctuality, its asset utilisation or operating model. The airline will not hold flights for connecting passengers. Worldwide by easyJet is subject to a 2 hour 30 minute ‘Minimum Connection Time’, which will give customers plenty of time to transfer between flights and/or terminals. Should a passenger miss a connecting flight they will be transferred to the next available flight.

For further information, please contact the easyJet Press Office on 01582 525252 or visit www.easyjet.com/mediacentre