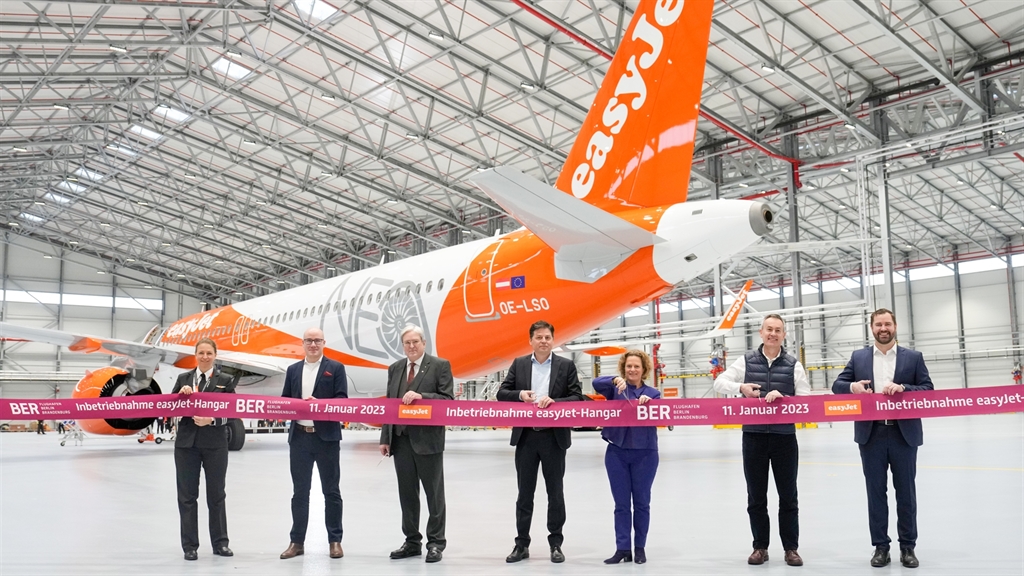 The new hangar, which started construction in September 2021, will provide easyJet with the capacity needed to ensure it can operate in the most efficient, safe and competitive way. The project was supported by the Wirtschaftsförderung Brandenburg as well as easyJet’s chosen partner MRO Facilities, who managed the design and construction to deliver market leading operational performance.

The maintenance hangar was built in accordance with the German Building Energy Act Gebäudeenergiegesetz, GEG) and as such meets the requirements for energy-efficient construction in the EU. More than 100 easyJet employees will be responsible at the new facility in BER for the supervision and management of aircraft maintenance activities of the easyJet Europe-fleet, which currently comprises 135 aircraft (incl. 8 A320neo and 5 A321neo). This will further improve the efficiency of operational processes and save maintenance costs in the long term. easyJet continues to operate its aircraft as efficiently as possible, being one of the largest single brand operators of A320neo family aircraft in Europe and is always looking for further efficiency improvements to reduce fuel burn and therefore carbon emissions.

You may also be interested in:  Viking announces partnership with Lufthansa for Exclusive Non-Stop Flights from Newark to Malta

“The opening of the maintenance hangar is a great milestone to start the year with.  We would like to thank our partners for their support in carrying out this ambitious project and we look forward to returning one of the first aircraft maintained here today back into our operation. The NEO aircraft is equipped with the latest Descent Profile Optimisation (DPO) technology which is one of the ways we can achieve substantial and permanent carbon emission reductions by enabling the most efficient descents.

“So now our maintenance operations here at BER can get underway and we look forward to welcoming many more aircraft from our modern easyJet Europe fleet in the coming years as we continue to renew the fleet, with the ultimate ambition to transition our fleet to zero carbon emission aircraft.”

You may also be interested in:  Qantas Frequent Flyer and PETstock Partner to Reward Pet Owners with Points for Purchases and Services

The airline joined the UN-backed Race to Zero in November 2021 and has published its roadmap to net zero carbon emissions by 2050, with a focus on new technology and the ultimate ambition to achieve zero carbon emission flying across its entire fleet.  It also includes an interim carbon emissions intensity reduction target of 35% by 2035. Since 2000, the airline has already reduced its carbon emissions per passenger, per kilometre by one-third through continued fleet renewal, efficient operations and aiming to fill most of its seats.