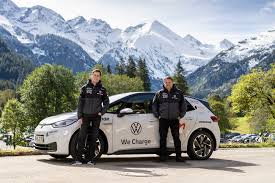 Steigenberger Hotels & Resorts and IntercityHotel is partnering CHALLENGE4 as it stages a major tour of Germany in a the new VW ID.3 electric car

Frankfurt am Main, Germany, 2020-Sep-30 — /Travel PR News/ — Promoting innovation and e-mobility – Rainer Zietlow, an experienced tour driver with the Mannheim-based special agency CHALLENGE4, sent out a strong signal for the future viability of e-mobility this afternoon as he embarked upon on a marathon 20,000-kilometre trip through Germany in a VW ID.3 electric car. Deutsche Hospitality supports this ambitious project by sponsoring overnight accommodation and catering costs. During their 64-day journey, Rainer Zietlow and his team will stay in hotels that operate under the Steigenberger Hotels & Resorts and IntercityHotel brand names.

The route begins in Oberstdorf, the southernmost settlement in Germany, and will end at the country’s most northerly car park located to the west of List on the island of Sylt. A highlight of this national expedition will be a visit to an SOS Children’s Village in Bernburg/Saale, which will receive a donation of 2,500 EUR for a housing project as part of the project. Rainer’s journey can be followed live on https://www.id3-deutschlandtour.com,and students from the University of the Media (HdM) in Stuttgart will be supplying daily updates in text, photos and videos.

“We are very proud to have been selected as CHALLENGE4’s exclusive partner for this mammoth journey through Germany in a VW ID.3,” said Denis Hüttig, Vice President Operations Steigenberger Hotels & Resorts. “This underlines our constant commitment to sustainable and responsible business practices.” Christian Kaschner, Managing Director of IntercityHotel GmbH, added: “Numerous IntercityHotels have already installed e-charging stations and are able to provide information on car sharing providers and cycle hire. Our FreeCityTicket scheme also allows guests to use local public transport free of charge. This joint project with CHALLENGE4 will act as a motivation for the company to expand its activities in the area of environmentally friendly mobility even more.” Rainer Zietlow is also looking forward to collaborating with Deutsche Hospitality: “I have plenty of experience with marathon car trips, and I currently hold three world records. Nevertheless, this tour is a particular challenge. My team and I will spend many hours on the road each day. Of course, it will be great to know that welcoming staff and a comfortable bed will be waiting for us every evening and that we will be fortified by a good breakfast in the morning.”

During the trip through Germany, Rainer and his team will be stopping off at the following Steigenberger Hotels & Resorts and IntercityHotels:

The CHALLENGE4 is supported by:

Deutsche Hospitality brings together five separate hotel brands under a single umbrella. Steigenberger Hotels & Resorts has 60 hotels housed in historic traditional buildings and lively city residences and also offers health and beauty oases set at the very heart of nature. MAXX by Steigenberger is a new and charismatic concept which places the focus on the essential in accordance with its motto “MAXXimize your stay”. Jaz in the City branded hotels reflect metropolitan lifestyle and draw upon the local music and cultural scene. IntercityHotel offers more 40 upper mid-range urban hotels, all of which are located within easy walking distance of railway stations or airports. And Zleep Hotels – a well-known and successful hotel brand in Scandinavia which offer service and design at a great rate for the many. The portfolio of Deutsche Hospitality currently includes almost 150 hotels on three continents 30 of which are in the pipeline.