“We are proud to have Allegiant more than double their capacity at CVG to include new service to Ft. Lauderdale and Phoenix and expanded service to Orlando, Punta Gorda and Tampa Bay/St.Pete,” said Candace McGraw, Cincinnati/Northern Kentucky International Airport, Chief Executive Officer. The additional flights on Allegiant represent a 157 percent increase in capacity by growing from seven flights per week to 18 flights per week. As the fastest growing market in Allegiant’s 15 year history, the success at CVG would not be possible without the immense support from the Cincinnati/Northern Kentucky community.”

“We are excited to further expand low-cost air travel in Cincinnati,” said Andrew C. Levy, Allegiant Travel Company President and COO. “Since we began operating in Cincinnati earlier this year, the community has shown an overwhelming appetite for access to affordable vacation travel. We are confident the community will appreciate the convenience of flying nonstop to these new destinations and the value of bundling their air, hotel and car rental reservation together.”

You may also be interested in:  CVG welcomes Vacation Express' non-stop service to Cozumel and to Grand Bahama Island

“With today’s announcement, Allegiant will offer more than 5,900 weekly seats to and from CVG,” said Wm.T. (Bill) Robinson III, Kenton County Airport Board Chairman. “Annually, this will create more than 300,000 new opportunities a year for CVG passengers to save money traveling to our most popular destinations. We are delighted to have Allegiant as part of the family of carriers at CVG and look forward to continued expansion.”

With the addition of Phoenix – Mesa airport, CVG will offer either year-round or seasonal nonstop service to 56 destinations, more than any other airport in the Tri-State region. 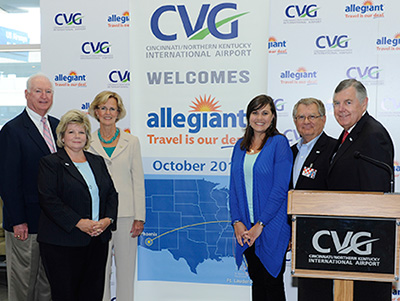