The Council of The National Trust for Jersey has elected Christopher Harris as its new President for a three year term.

JERSEY, 2014-6-17 — /Travel PR News/ — Christopher is a lawyer who has lived in Jersey since he was eight years old. He married Wendy Kinnard, formerly a Senator in the States. They have three children and a young grandchild, and family life and enjoyment of the countryside is important to them. He has been a member of Council since 2008. He was also a member of the Society for the Protection of Ancient Buildings (“SPAB”) for many years and undertook a Diploma in Local History at Oxford, much of which was focussed on mediaeval vernacular architecture, so has a background knowledge relevant for the historic buildings aspect of the Trust’s work.

His love of the environment and support for environmental issues has been heightened by his time spent in Sark, an island of deep and extraordinary natural beauty. He has been a member of Chief Pleas, the parliament of Sark, so has seen at first hand some of the political issues associated with the preservation of a rural environment. All in all he has a great passion for historic buildings and environment issues.

The National Trust for Jersey is the most wonderful and vibrant organisation. It has achieved so much in the last few years through a small but dedicated staff. 16 New Street, the Birds on the Edge project jointly with Durrell and the States of Jersey involving the introduction of Manx Loaghtan sheep onto the North Coast and the Wetlands Centre at St. Ouen’s Pond are all testament to the range of activities which the Trust undertakes. I cannot imagine a better organisation to give time and commitment to.

For me the trust is about the preservation of historic buildings, coastline and countryside. I thank everyone who is a member for their support. I invite those who are not already members to visit our website www.nationaltrust.je and to join us as members to support our work.

Our big campaign is Plémont, its purchase and return to nature. This has been a campaign for us since 2000. We look forward to the States debate to give us a grant for the balance of the funding required to complete the purchase. We can promise the island that if the outcome is successful the headland will be restored to nature and available for the benefit of the public. We are very nearly there and hope that members of the States will decide that support for the environment requires action as well as words. If they do then we will succeed.

Jersey is an island of great natural beauty and it is important to protect that beauty not only for ourselves but for our children and for their children too.

In addition the Trust is delighted to announce that Robert Le Mottée has been elected as one of the Trust’s two Vice Presidents. Mr Le Mottée is a semi-retired architectural consultant with extensive experience of building conservation and restoration. He has been actively involved within the National Trust for approximately 30 years, having served as a Council and Properties Committee member and Properties Committee Chairman in the past. 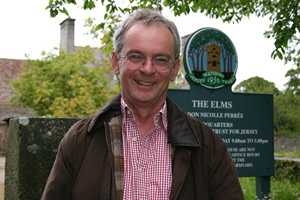