88th Four Seasons kicks off an auspicious year in China.

2012-08-31 — /travelprnews.com/ — Four Seasons continues to expand its presence in China with three openings in 2012, including its first hotels in Guangzhou and Beijing, and a second location in Shanghai. Ten years ago, the company began its expansion strategy in the country with its first hotel in Shanghai, followed by openings in Hong Kong, Macau and Hangzhou.

“In the span of a little more than eight weeks, we’re opening three new Four Seasons in three of China’s most important cultural and economic gateway cities – Guangzhou, Shanghai and Beijing,” saysChris Hart, president hotel operations, Asia Pacific at Four Seasons. “And that’s just the beginning as we look ahead to another new opening in Shenzhen next year, and continue aggressive development of half a dozen additional properties, including our first two resorts in China.”

Entering the Guangzhou IFC on the ground floor, guests board dedicated express elevators to the 70th floor lobby of Four Seasons Hotel Guangzhou. Upon arrival, they are greeted by a panoramic view of the Pearl River Delta, and another surprise is overhead. As guests step into the astounding light-filled atrium lobby, they are bathed in natural light funnelled down from a glass ceiling 30 stories above.

Spiralling toward the sky, 344 guest rooms and suites all feature floor to ceiling windows with interior design by HBA/Hirsch Bedner Associates. Throughout the Hotel, a marriage of Chinese culture and modern design is expressed with a series of motifs that reference the powerful symbols of dragons and clouds. A carefully curated contemporary art collection featuring international artists enhances the visual experience.

Six dining and entertainment venues include Catch, a spectacular seafood restaurant with a demonstration kitchen on the 100th floor and Tian Bar one floor below; Kumoi, a stunning Japanese restaurant on the 72nd floor as well as the Italian-themed Caffe Mondo; Yu Yue Heen, a stylish Cantonese restaurant on the 71st floor overlooking the lobby; and The Atrium lounge on the lobby level.

The Hotel’s events complex is conveniently accessed from ground level. A total of 3,585 square metres (38,585 square feet) of formal event space accommodates banquets from ten to 720 in three ballrooms, each with an adjacent VIP room. Eight smaller meeting rooms and 11 private dining rooms in the restaurants above offer space for 10 to 32 persons.

Smart, sexy and stylish, the city’s second Four Seasons is a glamorous new enclave in the heart of Shanghai’s business district, offering a chic respite high above the urban melee.

Wilson Associates have designed interiors for 187 guest rooms and suites inspired by Shanghai’s golden age of international trade and culture in the 1920s and 30s Art Deco period.

For elegant entertaining, the exclusive Shàng-xí showcases contemporary Shanghainese and Cantonese cuisine. In addition to the main restaurant, five sumptuous private dining rooms – each with exquisite décor inspired by a semi-precious gem – offer further opportunity to entertain and dine behind their discreet walls. At the heart of the social experience at Four Seasons Hotel Pudong, Shanghai is the first level Camelia with a menu of French cuisine created by a trio of chefs from the two Michelin star Le Cinq in Paris, paired with a full Japanese sushi menu. The restaurant features a lively and dynamic wine bar and stylish outdoor lounge area, plus a private sushi dining room for up to 12 guests.

Featuring exclusive treatment and products from GUERLAIN, the intimate FLARE Spa’s treatment rooms include two luxurious VIP spa suites with whirlpool and rainshower for two. A 24-hour fitness centre, as well as an indoor lap pool with skyline views from the 41st floor, are also open to guests.

Whether doing business in Pudong or celebrating special occasions, the Hotel is the preferred gathering place for affairs ranging from two to 200. In addition to six private dining rooms at the restaurants, the Hotel offers 800 square metres (8,611 square feet) of meeting spaces, including a divisible ballroom, three smaller salons and a boardroom.

Upon arriving at Four Seasons Hotel Beijing, visitors are struck by a look that draws on principles of traditional Chinese architecture as the main hotel entry impresses with its wide façade, reminiscent of the city’s Imperial Palaces. Inside, energizing colours, textures and familiar motifs come to life in public spaces and the Hotel’s 313 guest rooms and suites.

The Spa offers traditional Chinese and rejuvenating treatments in 11 treatment pavilions. A sun-lit indoor pool and 24-hour gym are also available to guests.

One of the city’s largest selections of meeting venues offers 3,250 square metres (35,000 square feet) of event space, including the fabulous Imperial Ballroom, with nearly 900 square metres (9,700 square feet) lit by chandeliers accommodating more than 600 people for business and social events, as well as an additional ballroom and ten breakout rooms. 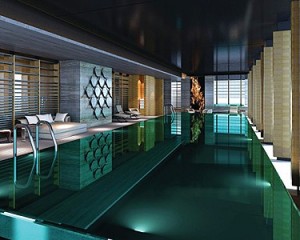