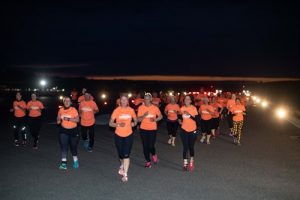 Aberdeen, UK, 2020-Mar-03 — /Travel PR News/ — A unique midnight run on the runway of Aberdeen International Airport will return for a third year.

With a course like no other, runners will take on the 3.5km Runway Run which will also benefit charities yet to be announced.

Once again, CHC Helicopters and Aberdeen International Airport will partner up to bring the run to the Dyce terminal.

Last year 300 participants signed up and took part in the event on the lit up runway.

The popular run will now return for a third year and take place on June 20 with runners urged to sign up now to book a place.

He said: “Returning to Aberdeen International Airport for a third year for the Runway Run is fantastic.

“Working with the airport team to co-ordinate the challenge and bring 300 runners on to the runway for charity is really special.

“I’d like to extend a big thank you to everyone who engaged with us last year and look forward to welcoming everyone back for another race on the runway this summer.”

“This year, participants will have the opportunity to run just after the longest day. We’d encourage runners of all abilities to apply for a space in the most exclusive running event in the region.

“We’re delighted to open up our runway to our runners once more and look forward to working in partnership with CHC Helicopter to raise essential funds for worthy causes.”

In November a cheque for nearly £15,000 was given to charity Befriend a Child with a separate donation for the 2019 event being made to charity Veterans with Dogs.

The current Runway Run record stands at 13minutes and 9 seconds for woman and 11 minutes 14 seconds for men.

All participants will start at the same time and complete 2 lengths of the lit Runway totalling 3.5km.

Times are recorded using chip technology for each individual runner.

There is also a chance for teams of 12 to compile their run times with friends as part of our team marathon.

The team marathon record is 3 hours, 13 minutes and 2 seconds.

Tickets will be £25 with a target sponsorship of £100 per participant.

Participants of all running abilities are welcome, tickets are available to purchase from the official Runway Run website at 1800 on Monday, March 2 www.aberdeenrunwayrun.co.uk

Aberdeen International Airport is the north-east of Scotland’s major transport hub and is a vital economic driver for the region, contributing more than £110 million a year to the local economy. It is the gateway to Europe’s energy capital and is Europe’s busiest commercial heliport. Aberdeen International Airport supports 3,400 jobs across the north-east of Scotland.

With 20 airlines serving 40 destinations, the airport handled 3.1 million passengers in 2018. It is nearing the completion of the largest investment programme in its history. The airport’s £20 million terminal transformation programme has resulted in a 50% increase in the size of the terminal building and with it, a comprehensive transformation of current passenger facilities.