“The response to JetBlue’s award-winning service to Boston has been overwhelming from the beginning of the route in February 2013. The additional service frequency is welcome and expansion from our existing carriers will always remain a top priority,” said Billy Swails, chairman of the Charleston County Aviation Authority.

Dan Blumenstock, chairman of the Charleston Area Convention & Visitors Bureau, enthusiastically welcomed the JetBlue decision by saying” “Boston has been and will continue to be a priority market for the Charleston region’s hospitality industry. Travelers from New England not only expect authenticity, refined cuisine, and quality accommodation, they actually demand it. The new service is a validation that the welcoming people of Charleston are getting things done in a manner that is applauded by discerning travelers.”

“JetBlue continues to deliver on the promise it has made from the beginning of our early conversations with them in 2009. They serve three of our top markets and are launching a fourth next week. The have far more than doubled their lift in the short time here and have quickly become a viable option for travelers who continue to be wowed by the award winning customer service offered by JetBlue team members.,” said Helen T. Hill , chief executive officer of the Charleston Area CVB.

Paul Campbell, executive director and CEO of the Charleston County Aviation Authority said “in the coming months, we will complete the $199 million expansion of Charleston International Airport. The additional modernized space allows our existing carriers to expand and it is certainly gratifying to see JetBlue move so quickly in order to take advantage of the new opportunity of growth at CHS.“ 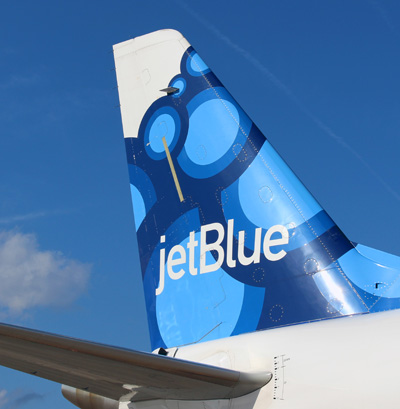