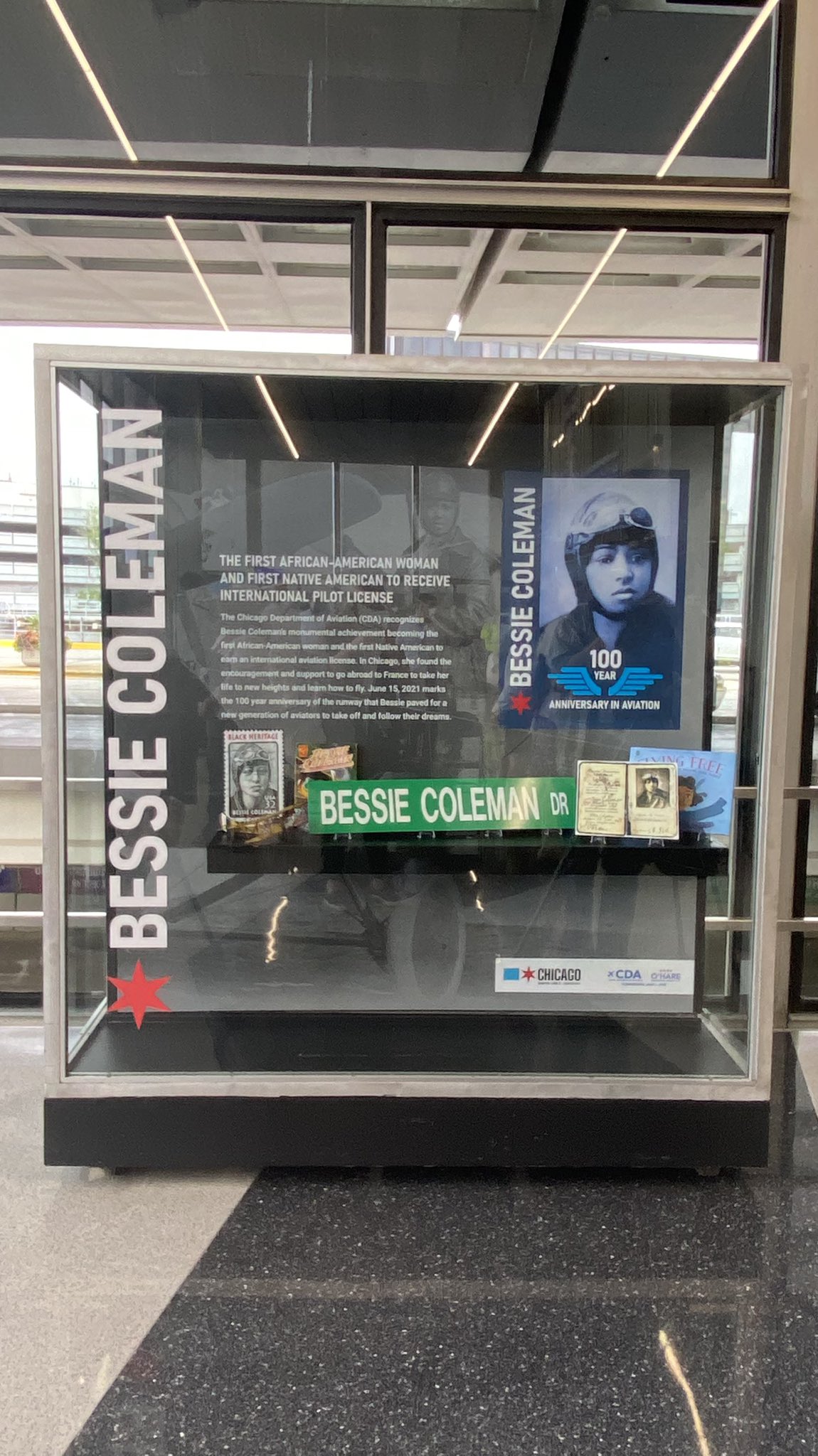 CHICAGO, IL, 2021-Aug-03 — /Travel PR News/ — The Chicago Department of Aviation (CDA) today (07/30/2021) recognized the monumental achievement of Bessie Coleman – the ﬁrst African American woman and the ﬁrst Native American to earn an aviation license. This year marks the centennial anniversary of the runway that Bessie paved for a new generation of aviators to take off and follow their dreams. Records of her license from the Federation Aeronautique Internationale in Paris, France, and other memorabilia were officially dedicated in a permanent display case in Terminal 2 at O’Hare International Airport.

“It was right here in our great city where Bessie Coleman found the encouragement and support she needed to literally take her life to new heights by learning how to fly,” said Chicago Mayor Lori E. Lightfoot. “That’s why I am so pleased that our city can play a part in honoring this heroic woman’s life and legacy, which shows other African American and Native American children that they too can break barriers and become renowned aviators.”

O’Hare passengers will be able to learn more about Bessie Coleman in the new exhibition located in Terminal 2. The display case includes a copy of her aviation license, a collector’s stamp, a model replica of her Curtiss JN-4 “Jenny” plan, a Bessie Coleman street sign, a copy of the children’s book Flying Free and a copy of the comic book Daring Stunt Pilot. The pilot’s license has been shared with the CDA by the DuSable Museum of African American History.

“We are proud and honored to work with Bessie Coleman’s family to bring more recognition to this great aviation pioneer,” said CDA commissioner Jamie L. Rhee. “The new display of artifacts provides historic information for all to learn about Coleman, but we honor her legacy further by working every day to make the Chicago aviation community welcoming and inclusive for everyone who dreams of flying like Bessie.”

Raised south of Dallas, Texas, Bessie Coleman was one of 13 children born in 1892 to sharecroppers Susan and George Coleman. She moved to Chicago at the age of 23 to live with her brothers. It was here that she found encouragement and support from Robert S. Abbot, the founder and publisher of the Chicago Defender, and Jesse Bing, the founder of Chicago’s first African American bank. She went on to study French and then travel to Paris in 1920 to earn her pilot license. Opportunities were few, and to make a living as a civilian aviator, she became a stunt pilot for paying audiences – a sort of predecessor to today’s air shows. Coleman died in 1926 in Jacksonville, Florida.

“My family and I are thrilled that the Chicago Department of Aviation is recognizing my great aunt’s achievements,” said Gigi Coleman. “Aunt Bessie has inspired generations of young people to fly in aviation and beyond.”

In 1990, Chicago Mayor Richard M. Daley renamed Old Mannheim Road, the main road at O’Hare International Airport, as Bessie Coleman Drive. The U.S. Postal Service honored Coleman in 1995 with a commemorative 32-cent stamp. In 2006, she was inducted into the National Aviation Hall of Fame in Dayton, Ohio.

Join the Chicago Department of Aviation (CDA) at the Concessionaire and Small Business Symposium on August 24. There will be workshops on Construction Manager at Risk (CMaR) bid opportunities and pre-qualification requirements, how to become a concessionaire, ACDBE/DBE/MBE/WBE certifications, as well as upcoming CDA contracting opportunities. CDA and the CMaRs will be available to discuss project specifics and answer questions. Visit www.flychicago.com/events for registration and more info.

About Chicago Department of Aviation

The Chicago Department of Aviation (CDA) is self-supporting, using no local or state tax dollars for operations or capital improvements at O’Hare and Midway International Airports. Chicago’s airports offer service to over 260 nonstop destinations worldwide, including 47 foreign countries, combined. Together, Chicago’s airports serve more than 100 million passengers each year and generate approximately $60 billion in annual economic activity for the region. Please visit www.flychicago.com to learn more about the Chicago Department of Aviation.