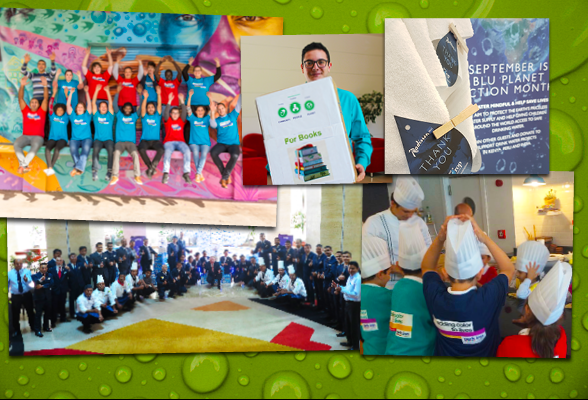 BRUSSELS, Belgium, 2017-Oct-17 — /Travel PR News/ — Carlson Rezidor Hotel Group, one of the world’s largest and most dynamic hotel groups, today (16 Oct 2017) shared the highlights from its 2017 Responsible Business Action Month activities around the world. In its 14th year, hotels and corporate offices around the globe organized over 1,200 activities in their local communities, dedicated more than 107,000 volunteer hours, and raised a total of 429,000 USD and in-kind donations of 945,000 USD for our global partners and other local charities.

September is the month when the hotels and corporate offices collectively reach out to the community, supporting those in need and contributing to our global charity partners such as Just a Drop (Radisson Blu), the Global Food Banking Network (Radisson), Read Indeed (Country Inns & Suites By Carlson) and Youth Career Initiative (Park Inn by Radisson).

“This time of year is very special for us as an organization, and while many of our global initiatives happen year-round, September brings all our offices and hotels together to help the communities in which we serve at the same time,” said Inge Huijbrechts, Global Vice President, Responsible Business. “During September, we make every moment matter by creating a positive impact on local communities through fundraising activities, donations and enthusiastic volunteering by our hotel teams around the globe.”

Each of the brands roll out programs that create unique moments that matter to their communities, not only during Responsible Business Action Month, but throughout the year.

Radisson Blu Dhaka, Bangladesh stood beside flood victims and showed their responsibility towards the community by donating food to local aid groups.

In August and September when the devastating series of hurricanes hit communities in the U.S., Latin America and the Caribbean, Carlson Rezidor teams banded together to raise funds for employees who were affected. Additionally, Club Carlson, our global hotel rewards program, deployed a campaign to our members who helped raise a total of 93,000 USD in donations for the American Red Cross.

Responsible Business Action Month is a core pillar of Carlson Rezidor Hotel Group’s overarching Responsible Business program which guides how the company interacts with its stakeholders, including employees, customers, partners, suppliers, the environment, governments and the communities in which it operates. Employees are encouraged to promote Responsible Business every day – in their homes, in our hotels and in their local communities. All of these personal and community actions combine to create a ripple effect of positive impact on the planet. For more details about the company’s Responsible Business strategy, please visit http://carlsonrezidor.com/responsible-business.

Carlson Rezidor Hotel Group is one of the world’s largest and most dynamic hotel companies and includes 1,440 locations in operation and under development with more than 230,000 rooms and a footprint spanning 115 countries and territories. The Carlson Rezidor portfolio includes a powerful set of global brands: Quorvus Collection, Radisson Blu®, Radisson®, Radisson RED, Park Plaza®, Park Inn® by Radisson and Country Inns & Suites By CarlsonSM. Guests can benefit from Club CarlsonSM, a program that redefines hotel rewards with a collection of exceptional benefits, services, and privileges at more than 1,000 hotels worldwide. Over 95,000 people are employed in Carlson Rezidor Hotel Group hotel systems and the company is headquartered in Minneapolis, Singapore, and Brussels. For more information, visit www.carlsonrezidor.com and follow on Twitter @carlsonrezidor.