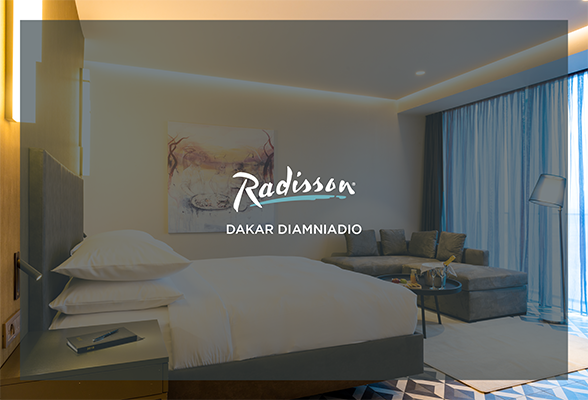 BRUSSELS, Belgium, 2017-Dec-27 — /Travel PR News/ — Carlson Rezidor Hotel Group, one of the most dynamic hotel groups in the world, has opened its second hotel in Dakar, Senegal on 4 December 2017. Radisson Hotel Dakar Diamniadio, is a 152-room hotel with a unique congress center that will provide over 14,700 m2 space for large scale exhibitions, conventions and events. The Carlson Rezidor Hotel Group has 84 hotels and over 17,500+ rooms in operation and under development across the African continent.

Tim Cordon, Area Senior Vice President, Middle East, Turkey and Africa, Carlson Rezidor Hotel Group said, “We are delighted to expand our presence in Dakar, one of Africa’s most vibrant capital cities. The Diamniadio district, with its ambitious development plan, is most certainly the area to watch in Dakar and we are thrilled to be the first international hotel group to establish a presence here.”

The hotel is located within the future business district of Diamniadio, Dakar and the impressive master plan is currently under development, led by the Presidency of Senegal. The Radisson Hotel Dakar, Diamniadio is located just 20km from both the new International Airport of Dakar Blaise Diagne and the city center has easy access via the new highway.

The 152-room hotel features a range of contemporary guest rooms, from standard to premium Junior, Executive and Presidential Suites. While the hotel restaurant offers local and international cuisine for breakfast, lunch and dinner. Guests can also enjoy a relaxing refreshment or snack in the lobby bar.

Andrew McLachlan, Senior Vice President, Business Development, Africa & Indian Ocean, Carlson Rezidor Hotel Group said, “Dakar is one of the largest MICE business hubs in Francophone West Africa, one of the many reasons we have earmarked Dakar as a city for scaled growth across our portfolio of brands within our African development strategy.”

The hotels meeting and events area consists of three spacious meeting rooms. It is however part of a larger mixed used development which today includes a 14,700 m2 Dakar Congress Centre, offering the ideal solution for any meeting and event type. In addition, an Expo Centre will be developed in the future, allowing the hotel to become one of the biggest meeting and events destinations in west Africa.

“This hotel project is developed by SOGIP, a leading development organization in the new Diamniado Urban Project, together with SUMMA International Construction, one of Africa’s leading contracting and investment groups,” said Husnu Tayanc, Vice President Summa Hospitality. “We are really proud to finalize this project within a record speed of under 12 months and very happy to partner with Carlson Rezidor Hotel Group in adding another Radisson to the portfolio.”

For guests seeking rest and relaxation or to keep fit and in shape, the hotel also houses a wellness spa and a gym, providing the ideal urban getaway.

“We are thrilled to open the hotel in a rapidly developing area of Dakar. We have great facilities within the hotel and guests can expect a memorable experience with the renowned warm Senegalese hospitality delivered by our passionate team,” concluded Cordon.

Rezidor operates the core brands Radisson Blu® and Park Inn® by Radisson in Europe, the Middle East and Africa (EMEA), along with the Club Carlson loyalty program for frequent hotel guests. In early 2014 and together with Carlson, Rezidor launched the new brands Radisson RED (lifestyle select) and Quorvus Collection (luxury). In 2016, Rezidor acquired 49% of prizeotel. Rezidor has an industry-leading Responsible Business Program and was named one the World’s Most Ethical Companies by the US think-tank Ethisphere.

In November 2006, Rezidor was listed on the Nasdaq Stockholm, Sweden. HNA Tourism Group Co., Ltd., a division of HNA Group Co., Ltd. — a Fortune Global 500 company with operations across aviation, tourism, hospitality, finance and online services among other sectors – became the majority shareholder in December 2016.