Edinburgh, 2014-8-8 — /Travel PR News/ — Tomorrow (Friday 1st August) five-star property, G&V Royal Mile Hotel Edinburgh will reveal its new uniforms. Guests at the hotel will be greeted by staff in the striking designs which have been created by leading Scottish design talent Judy R Clark. The designs include the hotel’s very own, unique G&V Hotel tweed, giving the uniforms bright bursts of colour that marry perfectly with the hotel’s luxury interior.

The new collection includes suits, waistcoats, cardigans, t-shirts, shirts, aprons, skirts and dresses, and even the new t-shirts and cardigans worn by staff give a proud nod to the city, with a colourful Edinburgh skyline sketch designed by Judy R Clark.

New kilts, created by Edinburgh kilt king, Howie Nicholsby will also be revealed as part of the new uniform launch. The hotel worked with Judy and contemporary British tweed and textile company, Dashing Tweeds, to create the vibrant, bold, bespoke tweed for the five-star hotel. The tweed, which incorporates unique light reflecting thread in the weave, has been used by Howie Nicholsby to create modern, signature kilts. They will be worn by the doormen who take pride of place outside the hotel on the Royal Mile and have attracted attention from tourists and locals alike, ever since the hotel opened in 2009.

Designer Judy R Clark is famed for her exquisite hand-tailored designs and striking, contemporary, yet timeless Scottish style. She was chosen by the hotel for her ability to blend Scottish heritage and traditional materials, with modern flair and style, which fits perfectly with G&V’s luxury five-star credentials and enviable location in the heart of Edinburgh.

You may also be interested in:  Carlson Rezidor on track to achieve its accelerated African growth strategy

Alongside the local designers, the hotel has worked with an array of Scottish manufacturers and producers to create each element of the collection; from forward-thinking knitwear design house ERIBE, skilled manufacturers D & M Fashions in Clackmannanshire and Dumfries-based Drove Weaving Co.

G&V Royal Mile Hotel General Manager, Carina Svensen said: “Our uniforms are renowned in Edinburgh for being unique and they’ve been turning heads on the Royal Mile for the past five years. We’ve been lucky to be able to create our very own tweed and have the uniforms designed to fit the hotel’s location, interior, ethos and team. Our guests are eagerly waiting to see the new uniforms and I’m excited we’re now able to reveal them.

“This is a new chapter for us and we’ve really enjoyed the opportunity to work with Judy, and other incredible home-grown talent to create a stylish and fun uniform we’re all very proud of, blending Scottish tradition with modern flair.”

Designer Judy R Clark said: “Designing the uniforms, it was important for me to draw on the local character and culture of Edinburgh, but keep the unique, contemporary, bold feel of the hotel. It’s been great to work with a lot of my local suppliers and producers, showcasing what can be created here in Scotland.

“The biggest measure of success was going to be the team at the hotel but they’ve all tried their new uniforms on now and are really excited about showcasing them to the hotel’s guests.”

The new, modern Scottish inspired uniforms have been introduced following the recent name change from the former Hotel Missoni Edinburgh in May. Under its new name, the unique property also joined Quorvus Collection, a new generation of expertly curated luxury hotels in Carlson Rezidor’s growing global portfolio. Member hotels are historic landmarks, contemporary residences, classic boutiques and urban retreats – all different in scale, architecture, ambiance and design, yet all committed to the same, unparalleled service philosophy.

You may also be interested in:  Carlson Rezidor’s global loyalty program Club Carlson won Loyalty Campaign of the Year at 2013 Mega Awards

You may also be interested in:  Carlson Rezidor’s "E-scapes" and “Thank You” digital campaigns won three awards at The Travel Marketing Awards 2016 ceremony in London 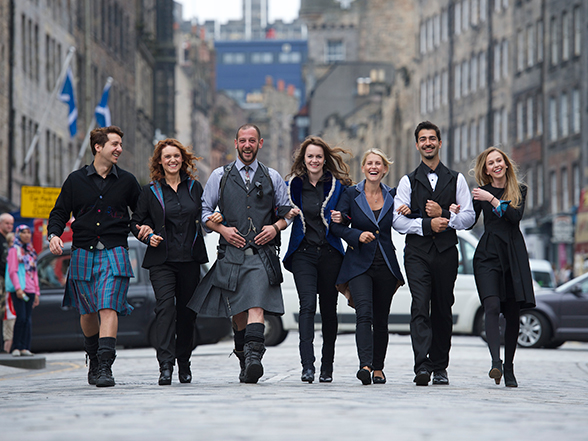