Brussels, 2014-5-16 — /Travel PR News/ — Arnaud Feist, CEO of Brussels Airport Company explains: “It is for the first time that we beat the historical record figures of the year 2000. A strong performance at the end of a very difficult economic period. In April of this year, we carried slightly more passengers than in April 2000 but with a third less aircraft.“

Passengers
In April 2014 Brussels Airport recorded 1.9 million passengers, up 16.6% on April 2013.  All segments register strong passenger growth: full service carriers, low cost, leisure and intercontinental air traffic. Transfer traffic grows substantially with 21% thanks to Brussels Airlines that makes every effort to further develop the Star Alliance hub, which is vital for the connectivity to and from Belgium.

On the other hand, the calendar too contributed considerably to these results.  In 2014 the Easter holidays fell entirely in April, whereas last year they fell in March. A like-for-like comparison of the number of passengers during this year’s Easter holidays and last year’s shows a 19.1% growth on 2013. The Belgian passenger has clearly left the crisis behind them and is rediscovering the joy of travelling.

Cargo
Cargo too continues the growth pattern of the previous months. In April, the cargo volume carried again increased by more than 6%. Integrator traffic, e-commerce, the transportation of pharmaceuticals and perishables in particular are performing well.

It’s important to note that the strong growth in passenger numbers goes hand in hand with the positive trend in cargo. Over 30% of cargo is carried on board of passenger flights. Cargo thus contributes considerably to the cost-effectiveness of passenger airlines.  The two cornerstones of air transport activities, passengers and cargo, are inextricably intertwined and mutually reinforce each other. Brussels Airport is more than ever a growth engine for employment in Belgium.
Movements
With 19,665 flights, the number of movements grew by 7.1% compared to April 2013. Since a few years, the increase in the number of flights has been systematically lower than the growth in passenger number. Due the use of on average larger aircraft and the improvement of the load factor per aircraft, the average number of passengers per passenger flight once again increased.

You may also be interested in:  Brussels Airport unveiled new ‘charity islands’ collection boxes of Red Cross, SOS Kinderdorpen, Unicef and WWF at the airport

In 2000 we were still recording nearly 32,000 movements in April. A passenger aircraft then carried an average of 80 passengers whereas in April 2014 the average number of passengers per flight amounts to 110, an increase by 37%.

The number of night flights dropped by a third since 2000. Together with the use of ever more modern planes, this has led to the average noise emission of the aircraft used at Brussels Airport being halved over the last 14 years.

Long-haul traffic is an important driving force for employment and strengthens the position of Brussels Airport as a European aviation hub and as an essential centre of growth for the Belgian economy.  The new route to Dubai that will be opened later this year will create about 200 direct new jobs at and in the vicinity of the airport and another 200 to 400 indirect jobs. 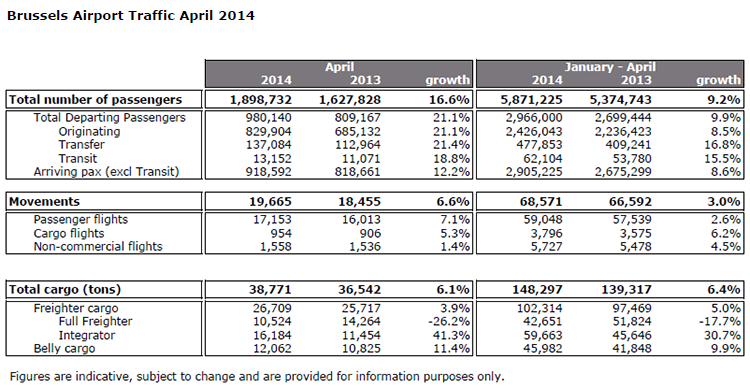