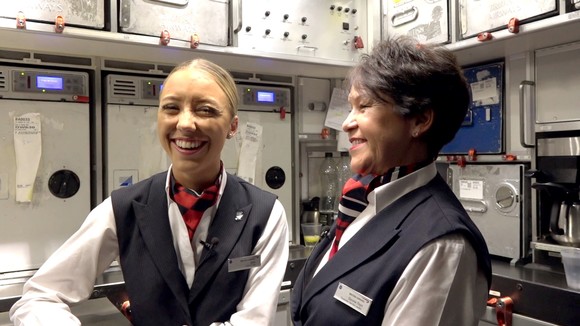 LONDON, UK, 2019-Oct-23 — /Travel PR News/ — To commemorate British Airways 100 years of flying, the airline created a flight to remember for its colleagues.  Flying from London Heathrow of Kuala Lumpur, two flights were operated solely by cabin crew who are family members or have a long family history with the company.

On board the 12 hour 50 minute flight, there were three teams of mother and daughter along with second the third generation British Airways colleagues.  All of them carries a unique story about working for the airline during its 100 year history.

Angela Williams, British Airways’ Director of People said: “Our colleagues have been such an integral part in making us the airline we are today. You only have to listen to the stories from our colleagues on board these flights to realise what a wonderful history British Airways carries through the people that work here.”

From one flight alone, our cabin crew colleagues had nearly 285 years’ experience of working for British Airways.  Their family had worked in roles including engineering and flight operations.

Leading the team on board, Keith Payne, a British Airways Inflight Business Manager said: “This was a once in a lifetime experience for our colleagues and customers on board.  Not only did our colleagues relish the rare opportunity to work as a family, our customers were in high spirits throughout the flight.”

British Airways is investing £6.5 billion for its customers over five years, taking delivery of 73 new aircraft including A350 and 787s, refurbishing its long-haul fleet with new cabins so they look and feel new, introducing new, redesigned lounges, new dining across all cabins, new bedding and amenity kits for First, Club World and World Traveller Plus, best quality onboard WiFi to every aircraft and providing access to power at every aircraft seat. The airline recently introduced its Club Suite, a new business class seat with direct aisle access on its A350 aircraft, which will be rolled out across the British Airways’ long-haul fleet over the next few years.