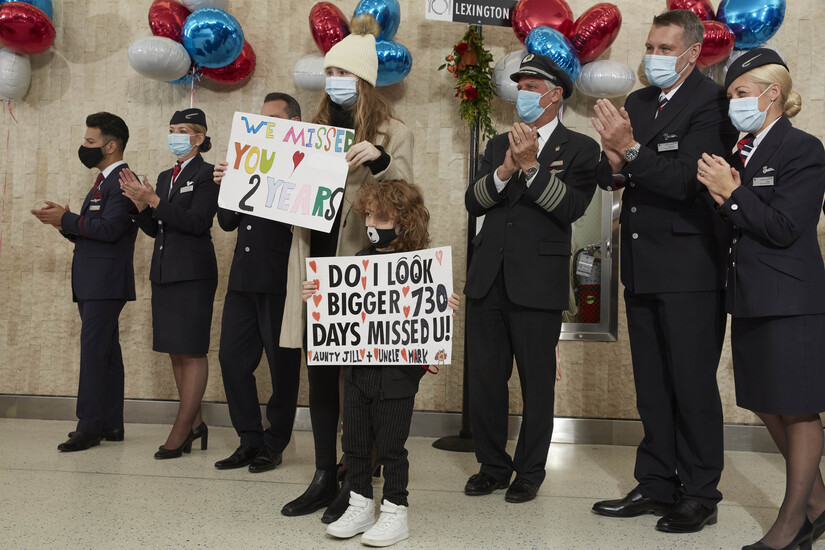 New York, USA, 2021-Nov-10 — /Travel PR News/ — British Airways today (08-11-2021) marked the reopening of borders between the US and UK, with a one-off return of its prestigious BA001 flight number which was previously used for Concorde.  Touching down at 11.15am local time, it was the airline’s first flight to arrive in the US following the restrictions.

Marking this busy day for transatlantic travel, British Airways collaborated with Royal Photographer, Chris Floyd to document this historic moment. After 604 days (19 months) of restrictions, BA001 flight carried friends and families separated with their loved ones due to the pandemic.

Emotions ran high in JFK Terminal 7 arrivals as customers were reunited, they could finally embrace and meet new grandchildren, family members and loved ones (see notes to editors for more passenger stories):

Famed for capturing the Duke & Duchess of Cambridge’s 10th wedding anniversary imagery, as well as stars from Robert De Niro to David Bowie, Floyd himself has been unable to reunite with family in New York. Chris’ collection of images released today perfectly capture the relief, love and joy in a reunion nearly two years in the making.

Royal photographer Chris Floyd said: “It’s been a long two years and having the chance to capture the moment loved ones were finally reunited was an honour.  My career to date has seen me help bring countless moments of love to life, but this new collection is truly something special.  I look forward to countless more friends and family members meeting again soon.”

Sean Doyle, British Airways CEO, said: “Today is about celebrating the UK-US reopening of the transatlantic corridor after more than 600 days of separation. Being able to bring families, friends and businesses back together is part of closing this chapter and celebrating what’s to come.”

In recognition of a long campaigned for and pivotal moment for the travel industry, for the first time ever, British Airways and Virgin Atlantic came together in a unique show of unity, taking to the skies in a synchronised departure on parallel runways at Heathrow. British Airways flight BA001 and Virgin Atlantic flight VS3, operating on A350 aircraft, left London Heathrow for New York JFK at 8.30am.

British Airways operates five flights a day from JFK to Heathrow, fares in November start from $467 based on return fare in World Traveller (economy).