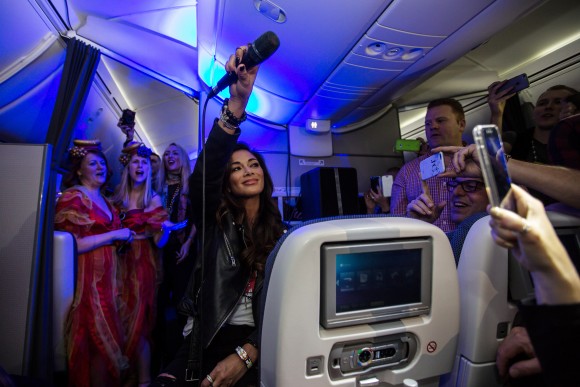 Jodie Kidd joined the star-studded flight, along with Made in Chelsea stars Oliver Proudlove and Georgia Toffolo and models Danielle Peazer and Emma Louise Connolly.

The VIP charter, which was compered by Jazz FM DJ, Nigel Williams, took place ahead of the airline’s official launch to New Orleans on March 27.

The city, also known as ‘The Big Easy’, is famous for jazz, the French Quarter, Bourbon Street, Creole cuisine and its annual Mardi Gras celebration.

Nicole Scherzinger, said: “Wow! We certainly got the party started up there! There was an amazing atmosphere on the flight and everyone really threw themselves into the party spirit. What a great way to kick off Mardi Gras!”

As well as the live in-flight entertainment, guests were treated to a New Orleans inspired Creole menu and shaken and stirred signature cocktails from award-winning Shoreditch drinking den, NOLA.

Saxophonist YolanDa Brown, said: “New Orleans is known for its jazz roots – even the airport is named after Louis Armstrong – so the flight was an amazing way to launch into Mardi Gras.”

The airline will begin serving New Orleans with its new Boeing 787-8s from March 27, 2017 with four flights a week from Heathrow. It will be the only airline flying direct between Europe and the Louisiana city.

The charter arrived in time for Mardis Gras weekend.  The return flight will leave New Orleans at 11.25pm on February 27 and arrive in to Heathrow at 2.10pm the following day.

Jazz FM will be hosting a live programme from Mardi Gras, which will be available through their website.