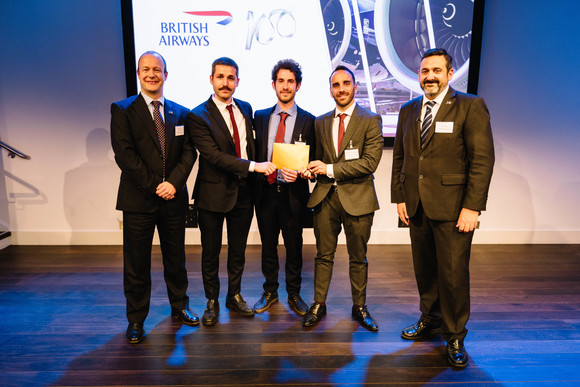 British Airways announced the winners of its BA 2119: Future of Fuels challenge

LONDON, UK, 2019-May-07 — /Travel PR News/ — British Airways today (May 03, 2019) announced the winners of its BA 2119: Future of Fuels challenge. British Airways celebrates its centenary this year, a landmark in aviation. To mark this, the airline’s BA 2119: Flight of the Future programme is exploring the next 100 years in aviation for fuels, careers and customer experience.

The BA 2119: Future of Fuels challenge, in collaboration with Cranfield University, was launched by then Aviation Minister Baroness Sugg on 30 November 2018 and called on British universities to develop a new or different pathway to achieve global leadership in the development of sustainable aviation fuels.  The airline posed the question of how to power a long-haul flight for at least five hours and produce zero CO2 emissions.

Today, British Airways announced University College London as the winner of the challenge.

After six months of competition in which 11 universities were whittled down to a final three, teams from Heriot Watt, the London School of Economics (LSE) and University College London (UCL) presented their solutions to an expert judging panel, including representatives from the Department for Transport and Cranfield University. Team entries were judged on a combination of criteria including carbon reduction potential, level of innovation, value to the UK economy and feasibility to implement.

IAG, British Airways’ parent company, will invest a total of $400m on alternative sustainable fuel development over the next 20 years. British Airways is also the first airline in Europe to invest in building a plant, with renewable fuels company, Velocys, which converts organic household waste into renewable jet fuel to power its fleet.

The final competition entrants’ proposals were:

Heriot Watt devised a sustainable solution which would see biomass – such as wood and agricultural crops – converted to fuel, producing 2.4 million tonnes per year of fuel for aviation. This solution would take out more carbon dioxide from the environment than would be produced when it is used to power aircraft. It is estimated that this would be the equivalent of taking more than three million cars a year off the road.

Christie Burley from LSE devised a solution that would harvest the CO2 produced by existing industrial plants and convert it into jet fuel. She estimated that her technology could produce 1.95 million tonnes of jet fuel a year and consume 9.7 million tonnes of CO2, which is around eight per cent of global industrial CO2 use.

UCL’s solution would turn household waste into jet fuel, building plants to convert the waste near landfill sites across the country. The team estimates that this could deliver 3.5 million tonnes of jet fuel annually by 2050, resulting in negative emissions and the equivalent of taking more than 5.5 million cars off the road every year.

British Airways Chairman and CEO Alex Cruz presented the winning team with its prize. UCL will receive £25,000 and an invitation to present to the IAG Board, as well as at two of the largest sustainable aviation conferences in the world – the IATA Alternative Fuels Symposium in New Orleans in November and at the Annual Sustainability Summit in Montreal later this month.

Alex Cruz, Chairman and Chief Executive of British Airways, said: “We are determined to play our part and find solutions to help reduce aviation emissions which contribute two per cent of CO2 emissions globally.

“Last year British Airways invested in 18 new aircraft which are up to 20 per cent more fuel efficient, with a further 69 deliveries between now and 2025, and we are leading the way in making the fuel we use sustainable.

“We are the first airline in Europe to build a plant to convert organic household waste into sustainable aviation fuel with our partner, Velocys and now we are the first to bring together academics from British universities to work alongside us to create new solutions to this key environmental issue.

“There is a huge opportunity for the UK to be a global leader in sustainable aviation fuels. We know that there is a future for electrification, a pathway for organic household waste to sustainable jet fuel and this competition addresses what other pathways there could be to decarbonise aviation. This winning proposal from UCL is incredibly exciting and we look forward to exploring it with them.”

“The quality of entries was amazing, and a great reminder of the talent that exists within British universities. We are delighted to have had the opportunity to partner with British Airways for the BA 2119: Future of Fuels challenge, which will play an extremely important role in delivering sustainable aviation in the future.”

“We were so excited just to make it through to the final – but to receive the top prize is overwhelming.  This is evidence that airlines are taking this challenge seriously and are starting to actively engage with academia to find sustainable solutions. We look forward to progressing our concept which will hopefully see the development of the fuel of the future.”

British Airways has been the leader in the development of the waste to fuels pathway since 2010 and led the conversation with UK Government to get waste-based fuels including in the RTFO (Renewable Transport Fuels Obligation) in the UK which was achieved in 2018.

The first Velocys plant in the UK, which is due to start construction in 2021 and be producing fuel by 2024, will take hundreds of thousands of tonnes of organic household waste and convert it into clean-burning, sustainable fuels, delivering more than 60 per cent greenhouse gas reduction, compared with conventional fossil fuel and savings of 60,000 tonnes of CO2 every year. Latest research findings estimate that the Velocys fuel plant will create more than 5,000 jobs in the UK and add nearly £3bn to the UK economy.

IAG, British Airways’ parent company, was the first airline group worldwide to set its own carbon emissions targets and we’re very proud of our leading role in securing the adoption of CORSIA. British Airways was the first airline to offer a carbon offset scheme fifteen years ago and we continue to offer a facility for our customers to support low carbon projects in the UK and around the world.

It also forms part of British Airways’ centenary celebrations this year. Alongside exploring the future of fuels, the airline will also be investigating the future of aviation careers and using futurologists to predict the future of the flying experience. This will be alongside other key announcements, including the introduction of the A350 to the fleet and a new business class seat – both part of the airline’s £6.5bn investment plan over five years.

The judging panel was: