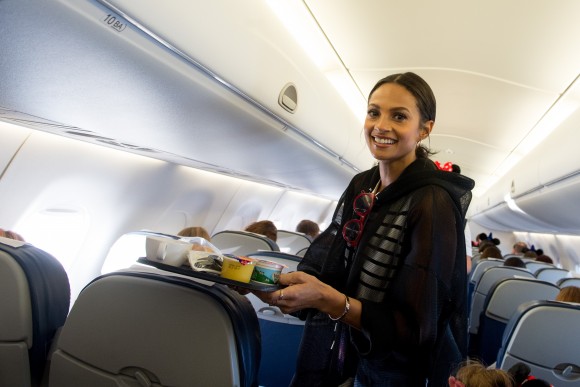 LONDON, 2017-Apr-26 — /Travel PR News/ — Forty deserving youngsters found time to sparkle as they jetted off with British Airways from London City Airport to join in the 25th anniversary celebrations at Disneyland Paris.

The children and adults from three London charities were joined by some famous friends including Alesha Dixon, Stacey Solomon, Joe Swash, Louie Spence and TOWIE’s Lydia Bright, for the magical day out.

This is the fourth year that British Airways and Disneyland Paris have teamed up to organise a day trip direct from the Docklands and this year it was children from Body and Soul, Fight for Peace and Oasis Children’s Venture who joined the fun.

All three charities are supported by Flying Start, British Airways’ global charity partnership with Comic Relief. Since the partnership began in 2010 the airline has raised more than £14.5 million to help sick and disadvantaged children around the world.

The special passengers flew to Paris on the private flight for the day in Disneyland Paris where they had a personal meet and greet with some of the characters, including Mickey Mouse, enjoyed lunch with the stars then spent the afternoon on the attractions before flying home.

Community outreach and charitable giving has been a priority activity for Disneyland Paris since the resort opened in 1992.  Disney magic is shared through the Disney VoluntEARS programme, whereby employees donate their time and talents to others through outreach events. In total, 1,158 Disney VoluntEARS gave over 15,700 hours to community service in 2015. The same year, Disneyland Paris offered its support to more than 300 different European associations, with over 1,000 community outreach events organised and supported every year including onsite day events, wishes granted to children, and visits to medical centers.